End of the Times: Earthquakes, Tsunamis, Oh My?

I have come across a news article recently about a Catholic archbishop in the Philippines who have used the recent natural disaster that has happened in Japan lately to advance his own skewed religious propaganda. According to a statement by the Catholic Bishops Conference of the Philippines, Archbishop Oscar Cruz has claimed that earthquakes and tsunamis are a call to repentance. Instead of putting God on trial for these events, people should know of life's fragile nature and of the upcoming judgment instead. But, really?

He continues on that several natural disasters point to this need for repentance: the 2006 lahar phenomenon in Albay, the 2008 devastation done by Typhoon Ondoy, and even the Maguindanao massacre.

Now I just don't understand what theory of causation this archbishop has in his head.

So there have been earthquakes happening lately. Is it true that earthquakes are happening more often now than before? Is it the case that it is the sign of the upcoming judgment day, that the end is near? I definitely remember reading Biblical passages about signs of the end of the days, including earthquakes and other natural disasters. Or is it the case that there hasn't been any increase at all, it just happens that we humans have more sophisticated ways of tracking these events?

Take earthquakes for example. It has been believed that earthquakes will increase as a sign of the last days. But if you look at the website for the US Geological Survey, which tracks earthquakes since 1900, there hasn't been an increase of these events at all. In fact, earthquakes of a magnitude such that was seen in Japan this March usually occurs about once a year, on a regular basis. And as has been pointed out here, even though the numbers for the smaller earthquakes seem to have increased, that is only because we now have better and more technologically-advanced instruments to measure earthquakes that were previously too small even to detect.

So, instead of calling on to people to repent, it would have been nice if the archbishop said something tangible and actually beneficial, such as encouraging people to donate to the relief efforts. Because seriously, repenting won't rebuild those houses that have been washed away by the waves. 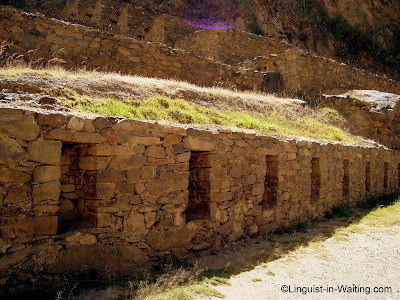 (Ancient Windows, from my Ollantaytambo Series)