I haven't watched a play since I attended the university's production of A Little Night Music. So, to change things, I decided to go downtown and see Inherit the Wind, a play written in 1955 by Jerome Lawrence and Robert Edward Lee. This play is produced by the New Phoenix Theatre in association with the Subversive Theatre Collective.

It was a parable that fictionalizes the Scopes Monkey Trial as a way to talk about the creeping McCarthyism that was in fashion at that time. The sad thing is, though, as mentioned by the director in the playbill, is that this play is relevant again in 2011, since we have seen plenty of politicians who whip up mass hysteria with cheap appeals to Christian Fundamentalism (just think about the various politicians that have appealed to Christianity and its apparent correctness in matters that are supposedly apolitical in nature, such as public schools, or whether it is okay or not to have a mosque near Ground Zero).

Anyway, I should not attempt to do a synopsis of the play here. There's the Internet for that. But instead, I should write about the performance. And I have nothing but praises for tonight's performance. They have arranged the stage to be right smack in the middle of the audience: the actors therefore take centerstage literally.

I love the way that reality and fantasy mixed in the production. They did their best efforts to include the audience in the play. There wasn't a distinction where the stage ends and where the audience begins. In fact, some of the audience played parts of the jury; granted, all they needed to do was stand up when someone says "All Rise", but given that the setting was 1920s, only men were allowed in the jury.

While the audience was filing into the theatre before the beginning of the play, the actors were already in their parts, selling lemonade (real ones, you can buy them), popcorn, fans, and so forth. They deliberately mixed in with the audience and the audience were encouraged to interact with them.

I should say that the performance was fueled with passion, and heavily charged. As I was sitting in my chair, I found myself forgetting that this is just a play, since I was being carried away by the sentiment that everyone in the theatre was conveying. Given that most of the characters were of a very religious nature, I as an atheist found myself taking pity on them, that all they were able to say were loud utterances of "Amen" and nothing else.

Overall, I am glad that I attended this play. As a cognizant human, I appreciate that I have a brain, that I have the faculty of thinking, that I can think, rationalize, and decide for myself, instead of just hooked into a single book thinking that it is the word of God. This play has reinforced in me why I deem absurd the idea that one can put faith on one piece of literature and decide that everyone else who doesn't do so is a sinner and deserves to be convicted. Because really, if I just let someone else do the thinking, such as a priest, or a book, or any other entity, then I am no better than all of the other creatures here in this planet. As the play has pointed out, it is quite ironic to see people detesting the theory of evolution for reasons that they do not think that humans descended from monkeys or apes, when their fundamentalist way of thinking makes them no different from a trained monkey, who's just trained to take every word of the priest as the absolute truth and say "Amen" in response.

If you want to see this play, by the time this post goes live, it is still playing, and will be until next weekend. The good thing is that Thursday nights are Pay-What-You-Can and therefore is an awesome way to participate in one of the many artistic outlets that Buffalo has to offer. 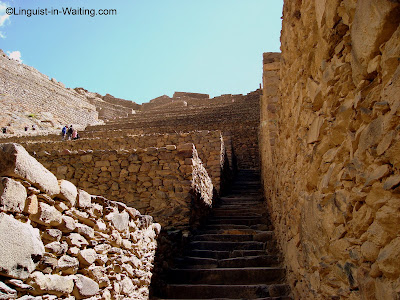 (Continuing the Steps, from my Ollantaytambo Series)