There's a recent news event that ticked me off. It has something to do with Giles County, VA. Their administrative website suggests that it's a pretty place to be, but after reading what I saw was happening there, it's an ugly sight.

See, the thing is, Giles County was in the news lately for something related to freedom of religion. Last February, there was a request for the school board to remove displays of The Ten Commandments. Yes, the Ten Commandments somehow is a prominent display in the public school system in Giles County. And some parents saw that as objectionable. Thus, the ACLU has stepped up saying that they would be willing to legally represent the families that are objecting to the displays.

Fearing a lawsuit, the school board decided to take them down. Good thing, right?

Now here's something that I didn't understand. Because of that, 200 students protested, saying they want their Ten Commandments back. You can see the reports here, here, and here. Their main reason for protesting? They claim that they are just exercising their freedom of religion and speech.

How silly is that? Forcing an institution to display a religious item like the Ten Commandments amounts to that institution endorsing that particular flavor of religion. I wonder if these protesters have actually thought their statements through. I wonder how they would feel if I were a Muslim, and I tell the school board to put signs of the Shahada, simply because I was exercising my freedom of religion and speech.

The thing is, freedom of religion doesn't work that way. If you feel so religious that you're compelled to display the Ten Commandments, then do it on your own. Display it on your front yard, display it on your car as a bumper sticker, display it on your body as a tattoo (speaking of which, here is another example of some ironic hypocrisy), but not in a public institution.

The sad thing is that the protesters have been quoted as saying things like This is Giles County and Christ is a big, big, big part of Giles County. For those who don't like it, go somewhere else. and This is America and we can have our Ten Commandments and if they don't like it, they can get out. I feel like these kids need to have a little bit of a history lesson, something involving the First Amendment. It is ironic to see this country, a country who started as a group of people escaping religious persecution in the Old World, who braved the ocean and sailed thousands of miles to this continent just so that they can practice their religion openly and safely, and yet now, these same people are trying to institutionalize their own flavor of religion that they are actually doing what was being done to them a couple of centuries ago.

The funny thing is that religion can be functional at times. But there's so many irrational aspects to it that it becomes dysfunctional to the most superlative degree. 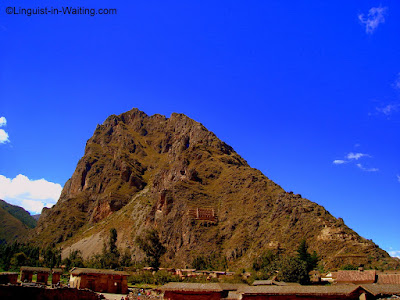 (The Other Hill, from my Ollantaytambo Series)