Again, as part of the Beethoven String Quartet Series that is in place in the university, the Vogler Quartet was in town. And again, I was able to secure complimentary tickets for the performance. And listening to this concert made me aware that string quartets have personalities of their own, and one can dissect the performance by looking at the piece on one hand, and looking at the performers on the other.

See, this is the third string quartet performance that I have attended this year that belonged to the Beethoven String Quartet series (yes, I attended the JACK Quartet, but that was 21st century music and on a separate plane altogether). I first attended the Ysaÿe String Quartet, followed by the Leipzig String Quartet. Those were both superb performances as well, even though I didn't review the second one. I have decided to review this third concert, however, since things stood out of the ordinary that I thought was worth mentioning.

First, perhaps something that doesn't occur usually, is that the Vogler Quartet decided to play an opener piece, something that wasn't listed in the program. They decided to play a short piece by Johann Sebastian Bach, the first counterpoint from his Art of Fugue. Perhaps it was a break in tradition, since it was an all-Beethoven program, but I very much welcomed it. It showed their versatility, that they can play a string quartet from the Classical Period, but also they can beautifully execute a string quartet from the Baroque Period.

Second, they decided to give two encore pieces. Again, their choice of music was wonderful. They played two pieces by Czech composers: one by Smetana, another by Erwin Schulhoff, where they played the third movement of his String Quartet, No. 1. Again, it showed their strength as a group, with respect to their versatility in being able to play various pieces from various different styles and periods.

I suppose the implication of what I wrote so far is that I preferred music written by other people as opposed to music by Beethoven. No, not at all. I love Beethoven, but I also think that there is a huge repertoire out there for the string quartet that is not heard here in Buffalo simply because the string quartet performances are dominated by the Beethoven series. Which is why I enjoy these little snippets of chamber music whenever they are performed.

Needless to say, the Vogler Quartet's performance of Beethoven was impeccable. It's always interesting watching groups like these perform, since you can see how synchronized they are, how intimate they have become with their pieces that they can communicate with each other using non-verbal devices, and therefore deliver a superb excellent performance. 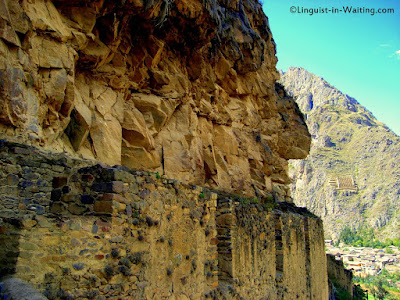 (The Dangerous Cliffside Trail, from my Ollantaytambo Series)