When Burning a Book Leads to Massacre

Once upon a time, there was a small church in Florida. It is attended by about 50 followers, and they have a pastor for a leader. The pastor believes that his beliefs are correct, and that Islam is the product of the devil. And because of that, the Quran must be burned. In fact, he even designated September 11, 2010 to be the International Burn a Quran Day.

So that didn't happen, back then. However, it did happen, a Quran was indeed burned last March 20. And because of that, plenty of Afghan citizens protested due to the fact that they were incited by the mullahs, and the protests turned violent, resulting in UN workers being killed.

That's a very bizarre turn of events, isn't it?

First, let me be clear here. I do not support violent protests. It is sad that several UN workers lost their lives simply because they were the next best thing to typify the West. A mob shouts "Death to America" and perhaps there weren't any Americans around, so the UN was the next best thing to represent Western influences.

I also do not support burning the Quran, or any other holy book, for that matter. While I agree that everyone has the right to burn whatever book we choose, I do acknowledge that there are sensitive issues involved with acts like burning a Quran. There are people who perhaps aren't capable of thinking rationally, that burning a book such as the Quran will just result in dire situations.

Personally, I would like to have the right to burn a Quran, burn a Bible, draw a picture of Muhammad, if I ever want to. It's all about self-determination. I do not want to be censored just because some group will be offended. However, even though I would like to have that right, I would think twice before actually doing that, because I understand that there might be people who cannot think rationally and just grab the nearest weapon out there and kill someone, if not me. I'd rather think that I am thinking logically and the other group isn't, and play it safe.

See, the thing is that this inherent dogmatism that is found in religion might be the ultimate culprit here. It seems that most religions preach the tenet that basically states that people who believe in Religion X is correct, while people who do not believe in Religion X are false and therefore will receive eternal damnation, everlasting destruction, Hellfire, eternal punishment, death, what have you. In short, religion preaches that I am correct and you are wrong. And if you are wrong, you will die.

Islam has the concept of jihad. It's a religious war, where people can actually kill in the name of religion, destroying the ones that do not believe in the faith. The Bible's track record isn't that clean either. There's the Crusades, when armies of European nations went ahead and killed the infidels and the heathens. There's the Taiping Rebellion, when religious fanatics provoked a bloody civil war that destroyed most of southern China. In the root of this is religion, and the idea that I am correct and you are wrong.

Funny, because this idea of infallibility still exists in the present day. Back to the Florida church, their leader is Terry Jones, who uses the term "Doctor" to refer to himself, due to apparently getting an honorary degree from a school that is not accredited. In his website for Stand Up America, there is this little blurb on the side saying that there are many questions and yet there's one answer, many problems and yet there's one solution, and a quote from John 14:6, about Jesus saying that he is the way.

How would I know if that is indeed the correct way? Oh wait, it's the Bible, it must be true.

I don't get it. I don't get how so many people in the world actually just take religion for granted, how so many people in the world claim that they believe that their religion is correct, and yet fail to actually examine whether that is really the case. I don't get how how many people can basically blindly believe that words coming from a certain book is the absolute truth, whether it's the Bible or the Quran, without actually checking it. When I was still involved in a religious organization, I've often heard the metaphor of the key and lock used in these questions. One would know that the Bible for example is correct if it is supported by outside evidence, and there are plenty of arguments that one can give to support this idea.

So, after all this, what did I learn? It seems that religion is less of a force for good but more a recipe for disaster. Religion closes the mind to free thinking, religion forces people to think that they are better than the next person. Is that really what we want? Whatever happened to the idea of tolerance and acceptance?

If I had my way, I'd try to eradicate religion for the sake of rational thought. But no, I won't do that. Religion, as much as it is a violent tool that has been used for ages, still has a therapeutic value. There are times when people need to feel that someone higher is watching their acts and keeping track of it, there are times when people feel the need to attribute unexplainable things to something supernatural, and I don't think it is good to take that away from people. Personally, I think that's just being gullible, but my beliefs aren't the only ones available in this planet. It is just sad when the same therapeutic belief system is used for the destruction of other peoples. 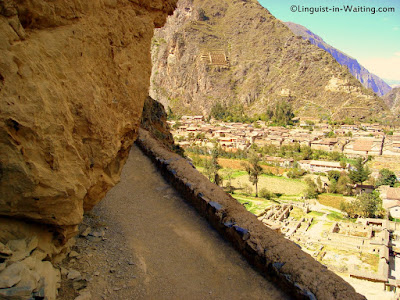 (Deadly Trail, from my Ollantaytambo Series)