So the other day, I was having a meeting with my adviser, and at the conclusion of the meeting, he told me that I should start thinking about my afterlife. I was surprised, but it turned out that it was a good thing.

So we were meeting regularly, every week in fact, in order to keep him updated with respect to my research and dissertation. I told him the progress regarding the data analysis for my experiments, and how one was concluding, one was already analyzed statistically and provided the results that we wanted, and another was currently running in the lab. It was basically a big progress report. That's cool, nothing superbly interesting there.

I also gave him the suggestion that we should try and write a paper together, perhaps presenting it at a talk somewhere. I gave him a sketch of what I wanted this paper to say, and I gave him the experiments that I have already run that proves my point, and in the end, he bought my story. That is a good thing. He told me of ways in which how I should pitch it, how to make it interesting, and so forth.

And that hit me nicely. If my adviser can see me graduating, that is a good thing. The fact that he told me to start thinking about my plans after graduating suggests that I am moving forward, and that things have been progressing. This means that the time to graduate is near, and there is life after graduation.

I told him my plans, and so he told me of some suggestions on what to do next in order to make those plans true. Why am I getting excited? I suppose it's just a great feeling to be able to somehow feel that another chapter of my life is closing, and another will open soon.

I have a feeling that my time here in Buffalo is getting shorter and shorter. Perhaps it's time to make memories; after all, if all goes to plan, Buffalo would be where I spent 7 years, so far that would be the longest span of time that I have spent in one location. So it's time for an anthem. Right now, Uprising by Muse is so appropriate in my opinion.

Ah, the joys of daydreaming... 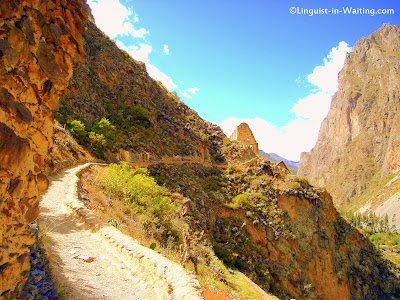 (Trail to the Outpost, from my Ollantaytambo Series)