And the Semester Ends (Bow)

I can't believe that it's the end of the semester already. It's been a rough and hectic fifteen weeks, starting in January, and it finally ended. Wow.

So what happened this semester?

Well, I began this semester after coming back from a trip to Mexico City: I spent a week in Mexico City and its surroundings, just to give myself a break. After that, I sat down and set to work.

During the semester, I progressed on my dissertation: I successfully ran three experiments (at this point, I already ran one experiment the semester before, thus bringing the total number of completed experiments to four). I also finally finished the grand design of my dissertation: people who have been following my progress perhaps remember that I suck at the big picture. I hate to think about the big picture in research, because I simply am not good at it. However, by the end of the semester, I now have a clear picture of what my dissertation is about, and how the individual pieces link together. I even talked to some people who were visiting the university, running them my storyline, and they were pretty much convinced.

Also during the semester, I managed a lab. This took plenty of my time, but it was also a quick way of conducting experiments. I finished my third experiment this way, and after I did the statistical tests, oh my, I loved the results.

I also attended quite a few events that are related to music and theatre. I got complimentary tickets for all of the music performances due to a promotion that was offered by the music department, while my theatre attendances were usually student-priced, which I got by attending the right shows at the right time. I guess it never amazes me how rich the cultural offerings of Buffalo are, even though it's not a big city like New York or Chicago.

During this semester, I also crossed the border quite a few times. In fact, I started the year in Canada, by attending a concert by the Barenaked Ladies! I also cooked in Toronto.

This past semester marked the first time I used the Dissertation Office as my permanent office. This is my third office so far, and perhaps the last. I guess once you enter the Dissertation Office, you exit either by quitting the program or by graduating. Obviously, I don't want to do the former. So hopefully, I finish this by next summer, and after that, I don't know yet as to where I am heading to.

So there, fifteen weeks zoomed by. It feels fast and slow at the same time. It feels fast because I was in class the other day (this is the class I am taking only for one credit) and thought, that wow, I didn't realize this is the last class for the semester. It's already over? I can't believe it!

And this is where my sixth year ends. Come August, my seventh year begins, and hopefully, it would be my final one. After all, the Mayans think the world is going to end in 2012. I'd like to get my degree before that at least. And if one silly reason for finishing within next year is not enough, I am turning 30 in July 2012. I have this hope of becoming a doctor before I turn 30 at least. 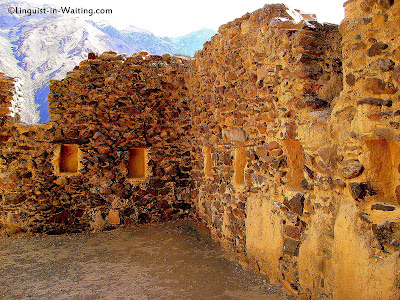