So this weekend I am here in Toronto. I have been here since last Friday, and so far, it's been a fun ride. It's the last weekend of the semester, and thus I have a little time to spare.

I got here last Friday, when I took the bus from Buffalo. The bus was coming from New York City and thus was a little full. After departing the bus terminal, we immediately crossed the Peace Bridge and then were processed in Canadian Immigration. Immediately, there was the shift from "restrooms" to "washrooms". It betrays where one is from in Canada if one asks for the "restroom" when in fact, they use the other term.

Anyway, the ride was pretty smooth. I arrived in downtown Toronto at 5:00 PM, and headed to Puku's office, where we met. Dinner was then the next agenda, so we went to the Gay Village as Darvish, the Persian restaurant that we were thinking of going to was located there. I guess Persian cuisine isn't very presentable; it tastes good and I actually like it, but it feels more home-cooked meal than restaurant meal. I guess I just need to adjust my expectations a bit.

Then, we walked to Little Portugal and headed to Nova Era Bakery, where I had flan (I always have flan if they are available) and coffee, while Puku had a piece of cake. Dessert was awesome, and so was the atmosphere. I had what was called a Canadian coffee, but what makes it Canadian I didn't really know.

The next day, we headed out and explored dead Canadians. After having breakfast in the Rustic Cosmo Cafe, where we had very awesome pancakes, we went to the Toronto Necropolis, and after that, we explored Cabbagetown. Finally, we headed to the St. James Cemetery. We visited the tombs of famous Canadians that are dead. I took plenty of pictures, as usual, which means that there would be a few posts in the upcoming future about dead Canadians.

After that, we became hungry, so we hopped on to the streetcar and went to Little India. We found this place called the Udupi Palace, which is this hole-in-the-wall eatery that serves South Indian cuisine. The interior was nondescript, it looked more like a cafeteria than a restaurant, but I did enjoy eating south Indian food for the first time. Wait, I take that back. I think I ate south Indian food before in a restaurant in Buffalo, but they didn't do a good job that I never went back there again.

After this, believe it or not, we went house-hunting. My friends are thinking of buying a house, and so I learned a lot about how to buy a house in Toronto. There seems to be a particular house style here in Toronto, which I think is more popular in the eastern side of the city than in the western side, which is this long and narrow and tall building structure. The living room and the kitchen would be in the first floor, while the bedrooms would be in the second floor up. We actually entered four properties, since they were in open house, and there were agents there giving us their calling cards and trying to sell the house to us. It was quite an interesting experience.

By this time, we have been walking for quite a while, so we went back home and rested for a bit. After that, we went out for dinner together with Oana (she's a common friend who is Romanian, lovely character) and Chad. We were in the Lakeview, which is a 1930s diner that had awesome beer. We stayed there until around 11:45 PM, at which we went back home and called it a day.

I'm still here, although my bus leaves for Buffalo later this evening. I always find myself amazed at the diversity here in Toronto, and that is actually something I like. Just after arriving in the city, I bumped into two women in the restaurant speaking Farsi; a bunch of people chatting in Portuguese in the bakery; I saw a Muslim woman wearing a headscarf while driving a Toronto public bus; an Indian man selling mangoes imported directly from India; and so many other things that are just signs of cultural diversity, something that I don't see too often in the United States, even in New York City. Something I love here is the idea that one can be whoever they want to be, one doesn't need to melt and integrate, unlike the sentiment that I often get in the United States, where every immigrants' goal it seems to is melt and dilute and become an American.

So, it's nice if I can call Toronto home. But at the moment, it's not that easy. After I graduate in a year, the idea is to move somewhere else where I can get a post-doc. Hopefully it is someplace interesting. But at the moment, I'll just have to be content in visiting Toronto and my awesome friends here every now and then. 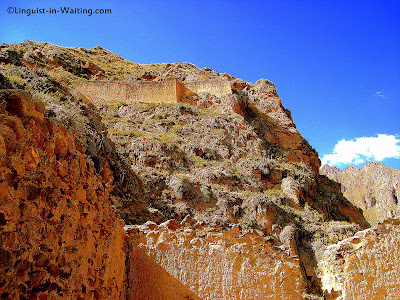 (A Citadel on Top, from my Ollantaytambo Series)