You know, sometimes, I wonder, that if you're a bus driver, especially a long-distance bus driver, then you should know your directions, right? Right? As a passenger, you expect that the bus driver knows where he is going, right? But apparently, that assumption should not be taken as true all the time. Why? Because I already had two times in which the bus I was riding actually got lost.

First, it was July 2010. I was on a bus to Boston, as I was spending a weekend with Puku. The route was simple: the bus just needs to go straight east on the I-90. The problem was that it must stop in these little towns of Rome, NY and Utica, NY. And apparently, the driver was a new driver, and therefore was unfamiliar with the route. The pathetic thing was that it ended up that the passengers who were on the bus gave the driver directions so that the driver can find the bus stop.

The second time was when I was returning from Toronto this past few days. The bus cleared the border in Niagara Falls, NY. Then, apparently it had to go to Niagara Falls International Airport. So we went there. After that, the bus got lost. We ended up getting a tour of the back roads of Niagara Falls, Wheatfield, and North Tonawanda, NY. That resulted in an hour delay of my arrival to the bus terminal in Buffalo.

I guess the most frustrating thing is this idea that I feel I have better directions than the driver, and I could have just told him to turn here and there, so that he can get to the highway immediately. But then, humans in general don't want to be seen as idiots, and he definitely was making efforts not to admit that he was lost. He was getting directions from a cell phone, and once, he stopped on the road, and a cop even pulled next to him asking what the problem was.

Oh well, at least I got to my destination, but it really is frustrating when you have people that you would trust to know things like these, and yet they fail to deliver. I wonder what it would feel like if there is a pilot flying a plane, and he lands the plane on the wrong airport! That would suck big time. 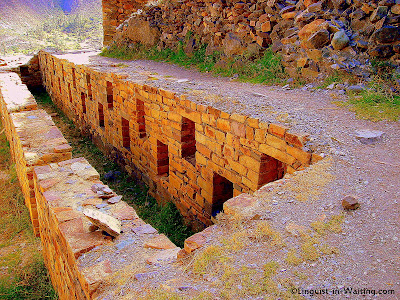 (Underground Room, from my Ollantaytambo Series)