A few days past, I attended a concert by the New York New Music Ensemble. They are a group of musicians that perform recently-composed music, as their name alludes to. As before, I received a complimentary ticket, and therefore I decided to check it out.

The group is composed of six musicians: Jayn Rosenfeld on flute; Jean Kopperud on clarinet; Linda Quan on violin; Chris Finkel on cello; Stephen Gosling on piano; and Daniel Druckman on percussion. Together with James Baker, who conducts the group, they performed a rather interesting set of pieces that night, and it never failed to amaze me yet again.

The pieces that they played were mostly compositions of Latin American composers. They performed Paramo for Sextet by Ricardo Zohn Muldoon; Trio for flute, bass clarinet, and piano by Charles Wuorinen; followed by Tania Leon's Alma. After the intermission, they performed Glaes by Alexandre Lunsqui and Simple Dances by Mario Davidovsky.

These pieces were rather bizarre (in a good way) and unique, as they were using several techniques that typically are not seen in other classical pieces. I especially loved the imagery that these pieces recreated, from the sound world that Paramo has evocated, to the musical mimicry of glass and clocks in Glaes. Rhythm is a very big factor in modern art music, as melodies usually are absent and rhythm pretty much drives the whole piece forward.

So, after two hours, I definitely enjoyed myself again. Unfortunately, this was the last visiting artist concert of the year, so I will have to wait until next year to see further performances. 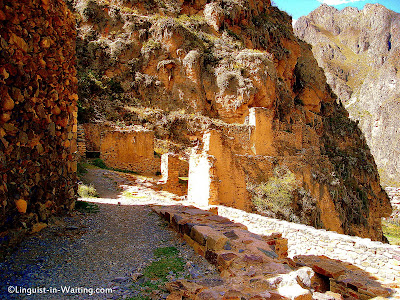 (Overgrown Ruins, from my Ollantaytambo Series)