I find it so funny and interesting at the same time that there are people who would believe that the world would end, even predicting the exact time and date. The prediction, according to one Harold Camping, was that events around the world were to happen at 6:00 PM in various time zones around the world. Well, May 21 has come and gone, and we're still here.

So, after this event, what can we say about it?

First, I really wish that this is one added evidence that religion is nonsense. This is one added proof that religion gives people too many unfulfilled prophecies, which makes one wonder whether it is still worth believing. I wonder how many people would stop believing once they see that their beacon of hope has failed, once again.

See, the thing is, I used to belong in a religion where predicting the end of the world was also a big thing. I once searched the history of this religion, and apparently, they had set various dates for it in the past: 1914, 1925, 1975, and so on. They even once told me that the end of the world will come and the generation of those born in 1914 will still be around to see it. Given that it is already 2011, if one was born in 1914, he or she will be 97 years old by now. I wonder how many people who were born that year are still alive.

So no, I don't think many people will cease believing even after May 21. The thing is, if they feel the need to believe, they will still believe.

I have been reading some news articles online about this event, and many people were reported as saying that they wanted it to happen, as the current world we live in is too hopeless, they feel, and they are looking forward to a better world in heaven.

Wow. Is that how you're dealing with your problems? By trying to escape reality? Just face reality and deal with the damned thing! If your current life is treating you crap, there is no use trying to think that there is a better world out there in the afterlife. You're just delusional and hallucinating. You hope that your afterlife is better, but really, you're just wasting time instead of trying to deal with your crappy present life in order to make it less crappy. See, there's no heaven or hell, just the present, we only got one shot. What's truly worth celebrating is the fact that we even got a shot at all.

So, what can I say, after all of this? I urge all people who were delusional to take a minute and think rationally, think critically, and for once, let themselves do the thinking, instead of being blindly led by a pastor to believing that the world will end on May 21. 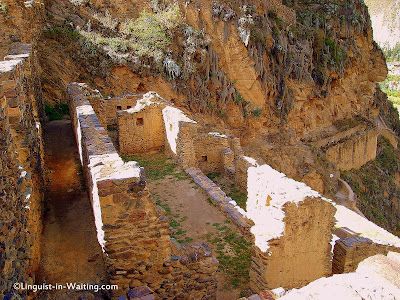 (View from the Top, from my Ollantaytambo Series)