For this semester's theatre production, the university's Department of Theatre and Dance decided to produce Side Man, which is a memory play by Warren Leight. This is a rather intense play, with emotionally-charged characters and an intricate storyline that I think was spectacularly accomplished by the cast.

The play begins by introducing the audience to Clifford Glimmer, a thirty-year old man, who turns out to be the narrator of the story. As the play proceeds, he tells the story of his parents, Gene and Terry. Gene is a very talented trumpeter, who cares more about his music but not for everything else; and Terry is an alcoholic. They initially meet while practicing music in a basement in New York City.

Gene's friends are then introduced, Jonesy, Ziggy, Al, and Patsy. The first three are fellow musicians, all are trumpet players except one, who plays the trombone. Patsy is a waitress who seems to sleep with everyone.

Several points of conflict are introduced: first, there is the rise of rock and roll, which is a threat for all of them and their livelihood, as they don't play guitar. There's also the innocence of Terry, who seems to be this young and naive woman who has a lot of things to learn about life. However, the biggest point of conflict is the fact that Gene is a musician, and yet cannot support his family. He is a professional musician, except that as he is just a sideman, he doesn't have a stable source of income. He tries script-writing, music recording, and yet everything doesn't seem to succeed.

This eventually causes the family to crash and burn. The ironic thing is, Clifford, the only child, eventually becomes the steering force for the family, keeping both Gene and Terry upright, preventing Terry from committing suicide by jumping off a skyscraper window, and commanding his father to leave the house and go somewhere else so that Gene and Terry won't kill each other.

As with other plays that I have seen, I like the format of this one, when the overall flavor of the act before the intermission is one of comedy, but tragedy afterward. Being a memory play, I also like the idea of breaking the temporal linearity: Clifford the narrator is in the present, but he freely intermingles with the characters from the past, handing them objects, correcting false memories, among other things. I was quite impressed by that theatrical trick.

The seven characters were also well-acted. Being a linguist, I was impressed by Lisa Sperry's East Boston accent. During the play, I always forgot that these are students, as their performance was so professionally done that I thought it was worth an off-Broadway performance.

I also like the way they did the stage. That revolving scenery was quite impressive actually, quite neat. They used a circular platform which formed the centerpiece of the stage, and it was divided into three parts, separated by walls that have doors. They just rotate the circular platform by pushing it to change the scene: one scene depicts their house, the other is the basement where they practice music, and the third one is a hotel room.

Overall, I was quite impressed and awed by this performance. No wonder I keep watching the theatre productions here in the university, as it is, in my opinion, of high professional quality. It was a very enjoyable evening. 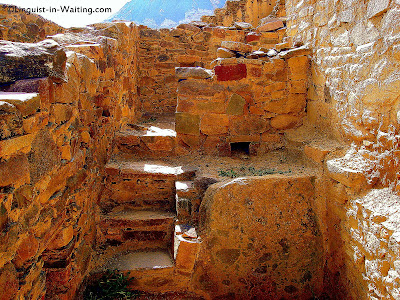