This past Saturday, it was quite a hectic day that I had plenty of things to do. But, somehow they all magically worked. And at the end of the day, things seemed to be settled down, that overall, I had a very good feeling of accomplishment.

So, what were the things I needed to do?

Well, since the Sunday would be a day where I am needed somewhere else, I needed to do the house chores that I usually do on Sunday this Saturday instead. Thus, upon waking up at around 7:00 AM, after lounging around and checking my email and such, I went ahead and did my laundry. I usually do one load of laundry every week, and this week was no different. I put it in, and after an hour, the washer was done. In the meantime, I made myself some breakfast.

After one hour, the laundry was done, and I moved it to the dryer. After one hour, it was done as well. But in the meantime, I did some academic work by arranging the experimental lists that I would be needing with respect to another experiment that I am running with a collaborator. Thus, after arranging that, I sent the Excel sheet to my collaborator, and the ball is now in his court.

The dryer was done after an hour, and that brings us to 11:00 AM. I then started folding my clothes and ironing the rest. I also dealt with a phone call from a potential roommate who was supposed to see the apartment that morning at 9:00 AM, and yet didn't show up, so he wanted to reschedule.

After ironing, it was already 12:00 PM. I made myself some lunch. Then I took a little nap.

At 1:00 PM, another person was scheduled to look at the apartment, and he did show up. He liked the place, and he asked whether he could take it. I told him that he could, but I promised someone else that I would wait until the next day for a decision, so I cannot say yes at the moment. I told him that if I didn't hear from the other person by tomorrow, I will call him and give the apartment to him. So hopefully, that will be solved.

I then took a shower, and at 3:00 PM, I headed to my office. I felt like I needed to be more productive, and I need to be in the mood for it, thus, my office would be the trick.

I got to my office around 3:45 PM, and after a stop in Starbucks and my requisite doppio espresso, I set to work, since I needed to make pivot tables in order to analyze my data by item. I did it in two ways, and now I have several PDF print-outs of my data, that I have enough to discuss with my adviser this coming Wednesday.

By the time I was done, it was already 6:30 PM. I brought dinner with me, so I ate them. After that, I went to the music department to attend a percussion recital. And after two hours and a wonderful performance, it was 9:00 PM, and I was ready to go home.

I went to the bus stop on campus, and a bus showed up, and at 9:30 PM, I was back home. Overall, it was a very productive day. My adrenaline was running, and I ended up feeling tired but very satisfied. 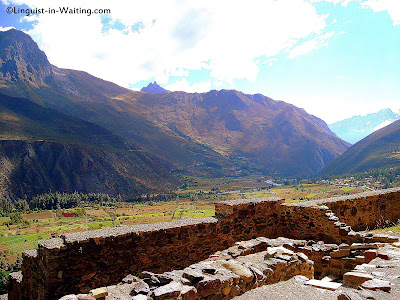 (Overlooking the Sacred Valley, from my Ollantaytambo Series)