This past week was quite hectic. As I said in a previous post, the past week was Super Lab week. We scheduled several appointments for participants to do experiments and earn extra credit. Thus, 4 days and 51 participants later, I have finally finished Experiment 5.

And the following Saturday, I just sat down in front of my computer, and coded the data that I got. It was a story continuation task: I gave my participants a sentence that describes an event, and their task was to continue the story by providing me another sentence. I thus digitized all their responses by typing it up in an Excel sheet, so I can manipulate it.

So yes, this past week was quite interesting and productive. I finished Experiment 5, I sold my story to my adviser and made him agree that it's a good idea to write a paper together, and I had fun with a friend's party, as there was quite a bit of wine and desserts.

I also decided to be a freelance writer for Blogcritics.org; they saw my book reviews and invited me to be a reviewer. So I sent a couple of writing samples, and they approved it. My first article actually appeared a few weeks ago, when I wrote the review for Dinaw Mengestu's novel How to Read the Air, which I also published here.

In some other news, this week is somehow the weekend for UBCON, which is apparently the annual live-action role-playing convention. I didn't realize that there's quite a few of those people that are interested in that type of stuff here. I looked out my office window yesterday, and I saw a girl dancing by herself. Cristin told me that when she looked out the window, she thinks she just saw a dinosaur walk by. There was a medieval battle going on in front of the Student Union. Overall, it was quite bizarre.

Anyway, bizarreness aside, I suppose it was still a good week. There's three weeks left in the semester, and pretty much everything is settled. I have some stuff I need to bring home with me when I visit my parents again: it's already in the mail and will arrive shortly. I just need to finalize some documents that I will be needing for the errands I am going to do in Manila. Oh, and one last thing, is that I was informed by my roommate that he is leaving the house, so I have to find one replacement for him. But that shouldn't be too hard, as I haven't had trouble before. 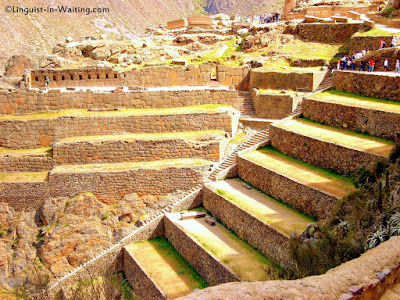 (Inca Terraces, from my Ollantaytambo Series)