A couple of weeks ago, I asked my adviser whether he thinks I can graduate by the summer of 2012. He was optimistic. He said that if I cannot graduate by June, I can definitely graduate by September 2012. So yes, because of that, I was excited. After all, he told me before that I should start thinking about my afterlife. So it turns out that I have about a year to think about it. I was also told that I should start thinking about where I want to be next. So, with that in mind, I have gathered a wish list. This is a list, which is very preliminary, and it lists potential places where I would want to end up next.

1. School of Humanities, The University of Hong Kong

I was snooping around interesting funding and research opportunities a while ago, and actually two years before, I found this one, the Society of Scholars in the Humanities. What does this require? Well, I looked into it, and it seems that if you belong to a field that is in the Humanities area (such as Linguistics), then if you are about to graduate, or is a recent graduate in the field, then you can be a scholar. It's a two-year contract, and it will allow me to do research and increase my publications. The good thing with this is that Hong Kong is actually a location that would potentially allow me to do research on Tagalog/Filipino. I believe there is a substantial Filipino population in Hong Kong, and so finding participants to be in the lab should be easier. The way it is here right now, I am forced to do experiments in English because that is the easiest subject pool to find.

This is one swanky place. I have this little daydream that after graduate school, I would love to do a post-doc in a brain lab, where I can either take pretty pictures of the brain, or measure the brainwaves that occur while people are processing language. Doing fMRI experiments are expensive, but doing ERP experiments are cheaper. I would love to get training on how to put these shower caps that measure the electrical activity that the brain emits while doing things with language. It is a dream of mine to take my research to this direction, and since I don't have an opportunity to do ERP research right now in my current institution, I would love to get training on that as a post-doc. That means I need to network and make contacts that would potentially allow me to join their lab for two or three years.

I would love to work in this lab. Not only is it in Spain (in San Sebastian, in the Basque Country), but also because it is a center that does perhaps exactly the things that I am interested in. I glanced at their research areas and as geeky as it might sound, it excites me to read that they are doing the things that I am interested in pursuing. They have done research on discourse processing (how the brain deals with linguistic phenomena that are larger than sentences), which is basically the main theme that my dissertation revolves in. I would hope that by next year, there is an opening for a post-doc here and I would definitely apply if there is one.

I love the idea of this department. I think this would be the perfect department for me, since I straddle both linguistics and psychology when it comes to my interests. I am not fully sold on the idea that all I want to do from now on is lab-based research. In fact, I am currently collaborating with someone else on a theoretically-oriented paper. Also, my dissertation is structured such as there are parts of that thing that I can pitch to formal semanticists, and also parts that I can pitch to psycholinguists. Granted, it feels like Humpty Dumpty, but that's just where my interests lie. I love to study language systems, and I don't mind theorizing about them, but I want psychologically-informed theories. Which is why I also need a lab to verify my theoretical ideas. A department that combines these two things in one roof would be an awesome place to do research.

So, that's just four places that I could think of right now that would be really awesome places to go to next. Now what I would need is a position to magically appear so I can apply. And what I would also need is a scenario where my application would be the best one out there. Okay, that's being ambitious, but I suppose there's no harm in trying.

So it's Hong Kong, Leipzig, San Sebastian, or Providence. Let me keep my fingers crossed. 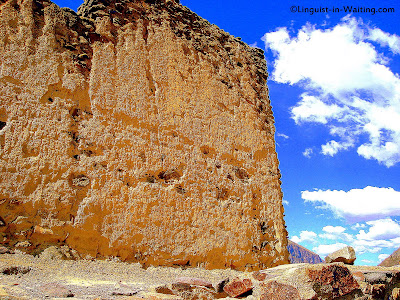 (Solid Slab Against the Sky, from my Ollantaytambo Series)