I have flown halfway across the world recently. I am now in the Philippines, for a little bit, visiting my folks. In order to do that, I had to fly from Buffalo to Chicago, followed by a flight to Tokyo, finally culminating with a flight to Manila. All in all, it took me about 24 hours to reach my destination. It’s a rather tiresome journey.

The interesting thing is that there are plenty of opportunities to watch people from all over the world. In fact, that’s what I just did, and they were interesting to say the least. Some were funny, some were hot, some were obnoxious.

So, I began this long journey at 8:00 AM. I was at the check-in counters of United Airlines in Buffalo Niagara International Airport, and nobody was there. That’s a good thing, which means that I don’t need to stand in line and wait in order to be assisted. I immediately went to the counter, and after depositing my one check-in luggage, I headed to the boarding gates, clearing security along the way. There was a lady who didn’t seem to know what to do in security, so she kept asking me questions about what to do next, where to go to, and so forth. At that time, my niceness index was still quite high, so I didn’t mind at all.

I waited about an hour and a half at the boarding gate before I saw any action. The aircraft was on time, which was good. There was a person I recognized, the name, at least. It was my roommate’s adviser in the Math Department. I saw him editing his CV using LaTeX. He was making weird guttural sounds every now and then, perhaps there was a little accumulation of phlegm, and he would make this coughing sound every now and then. It was quite bizarre. I think he was heading for Hong Kong or Beijing, but I wasn’t sure.

I also saw several Canadians flying, with their passports and Canadian money. They were exchanging the money they had with American ones, taking the Canadian ones out of their wallets and putting in American ones.

When I got to Chicago, I had to go to the other side of the terminal because that was where my next flight would be departing. Chicago has a different feel than Buffalo: there were more people, more crowds, more shops. I saw several beautiful men and women and somehow even had the time to mentally undress them and wonder what it would be like to, well, let me stop here before I become explicit.

I found my gate, and I met someone from my lab. We already knew that we somehow accidentally bought the same ticket: I was traveling to Manila but she was traveling to Seoul, and we were on the same flight to Tokyo, though she flew to Chicago from Buffalo with an earlier flight than mine. We were discussing lab-related stuff, and I was about to turn on my computer, when my laptop somehow had an identity crisis and wouldn’t let me inside. Bad. Now it nagged me in the flight, as I didn’t want a broken computer, especially when it is just one year old.

I got settled in my seat, especially since this was a very long flight, with a flight time of 12 hours and 45 minutes. I had two meals and a snack, and they played 2 movies as well. I on the other hand was just content with reading my book, and I finished half of it, after beginning it when we were taking off.

Three hours before landing, I realized that my seatmate had some relationship with my past. He wrote his Japanese address as Ashiya City, and I am quite familiar with that place. Not only that, he turned out to be from Buffalo as well: and he goes to the same university as I do. We apparently were on the same flight from Buffalo, but we just didn’t see each other. He’s Japanese, but grew up in the United States, and now is a foreign student in my university. Like me, he also has a younger sibling, who was born in the United States, and because of that, is an American citizen. He was visiting his parents in Japan. We ended up exchanging contact information, as there is a high chance that we would probably bump into each other when we get back to Buffalo.

Upon arrival in Tokyo, I met my lab member, and I bid her goodbye. I was heading to Terminal 2 (the previous flight arrived in Terminal 1) to catch my Japan Airlines flight. She on the other hand was staying in the same terminal to catch another United Airlines flight for Seoul. Thus, after clearing security, I hugged her goodbye, and I won’t be seeing her until August.

I took the connecting bus that links both terminals, and immediately I saw people whose languages I recognize. There were a few Filipinos that were connecting to the flight that I am taking as well, but they apparently came from Calgary. It turned out that there was an Air Canada flight that arrived as well. I have this idea that Filipinos are rather loud in public, and they talk to strangers freely. I will have more to say about this, but in the meantime, I just quietly sat down and watched them.

Upon arriving in Terminal 2, I had to get a boarding pass. This is because I was flying on two different airlines, and I wasn’t checked in for the second one yet. They gave me my boarding pass, and I now have 3 hours to burn. I went to the gate, and already saw a bunch of Filipinos socializing. I didn’t feel like being there to listen to all of their life stories, so I went back to the Main Building (the gate was in the Satellite Building, which was linked to the Main Building by an automated tram). I wanted coffee, but more than that, I found an Internet café, which was free of charge.

Remember that my laptop was broken, in the sense that it wasn’t recognizing my password and therefore wouldn’t let me log in? I went online, bought a large ice coffee, and went to work, trying to fix it. I searched for solutions, and sure enough, I found one. Apparently, I had to change some BAK files in my computer. So I went to safe mode, fixed it, and voila! My computer was fixed and running once again.

After fixing my computer, I went back to the gate, and I still had an hour to spare. I took out this one research proposal I had (I am collaborating with a new collaborator, and he wrote me a short research proposal giving details about what this research will be about), and wrote an email reply to him, with my comments and questions. After I did that, I just plugged in my iPod and listened to music, as people were chatting all over me. After a few moments, they began boarding, and I was able to enter the aircraft.

Everyone boarded quite nicely, and we were able to depart on time. However, there was one Japanese person a few rows behind who was giving the flight attendants some problems. He was sleeping, and his seat was reclined, but it shouldn’t be, as we were about to take off. He even refused to follow directions, and even shouted at the flight attendant. I don’t know what happened, but eventually he complied.

This made me think. Different people from different countries have different behaviors. Which is just expected, right? But how they are different makes me think that sometimes, observing these people just for the sake of observing them is quite interesting.

Take the Japanese for example. My previous flight (United Airlines from Chicago to Tokyo) had 4 Japanese-speaking flight attendants. I noticed several Japanese travelers who seem to not be able to speak English at all. The way they acted in flight made me think that they were lacking in confidence. For example, there was a meal cart being pulled and a Japanese person was waiting for it to pass because he wanted to go to the restroom. The American flight attendant pulling it told the Japanese person that there was another restroom behind him, so he didn’t have to wait for the cart to pass. I guess he didn’t understand, as he just bowed down and still waited for the cart to pass. Aside from that, I also noticed that they acted quite nervous, acting like they were doing something which they were not sure about, with hunched shoulders and an overall body language that suggested a lack of confidence. Perhaps that was because of the language barrier, but it was a huge contrast with the actions of the obnoxious Japanese man who was in the final flight, who was quite like a buffoon, disregarding safety measures just so that he can recline his seat.

The Filipinos are also quite interesting. It was a wonder what makes Filipinos want to broadcast their station in life, when they get a life upgrade. There were a few Filipinos in the flight who were already immigrants and citizens of a foreign country, like the United States or Canada for example. And because of that, they were quite loud, even waving their foreign passports for everyone to see, just so that everyone else can see that they are immigrants now and are in a way better than the average Filipino. But really, they don’t seem any different from the rest of the folk, in my opinion. They still act like they’re rustic and provincial, they still speak English with an accent, their taste in clothing still suggest that they are working class people and not the middle class, and so on. Really, if I wanted, I could be the one broadcasting my station and showing them that I am above them, but I just let them be. Having a Canadian passport doesn’t mean you know more than just Jollibee and Red Ribbon, I guess.

But seriously, I don’t need you to show me pictures of your relatives that are doing great in North Carolina, when your attire tells me that you could fit well as a vendor in Divisoria.

Anyway, 4 hours later, I arrive in Manila. It is hot, and the moment the aircraft parks at the gate, the windows fog, because the interior was cooler, way cooler than the exterior. One good thing was that it seems that the Ninoy Aquino International Airport has been improving. I remember the terminal to be quite dark and unmaintained, but when I arrived, it seemed white and rather new. It was fully air-conditioned, and overall it was a rather pleasant experience. I was rather pleased to see that my country has been improving as well.

So that was my 24-hour journey from Buffalo to Manila. I am here for a few weeks, as I have some errands to run. But after that, I’ll be back in Buffalo and tending to my dissertation and running experiments in my lab. 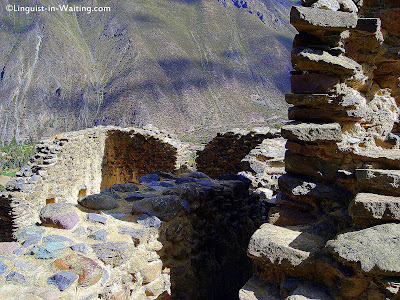 (Rocks and the Big Void, from my Ollantaytambo Series)