It's always been a wonder to myself why Filipino money always seems to look like some typhoon has passed over it. It's just so dirty, so old, and so smelly. Now, after traveling in the Philippines, I think I know the answer. In short, Filipinos have some habit they have regarding money, and everyone doesn't seem to mind it at all.

See, try riding a jeepney for example. You'll give a bill to the driver, and what does the driver immediately do? He rolls it, he folds it, he quarters it, he does everything he can to the bill until it is deformed. I have seen a few jeepneys where the money are all rolled up in tiny rolls, like home-made cigarettes, and stuck in between the metal in the jeepney dashboard. If there's a conductor in a bus, on the other hand, he will fold it lengthwise, and then wrap it around his fingers, as if it's some sort of makeshift fan that he is holding.

The other day, I was given a 20 peso bill for change. I didn't recognize it immediately, because it was so dark and dirty that for a second, I wanted to get some hand sanitizer and rub it all over my hands after handling it. Needless to say, I disposed of it at the earliest convenience, using it as my jeepney fare for the next ride I took.

I've seen bills that are made of plastic, instead of paper. Mexico for example, has initiated those, using plastic bills instead of paper. I wonder how long they last if that's the case. But perhaps, if the Philippines uses that, it still wouldn't last long, as the bill-handling habits of the Filipinos are rather hard to break. They would still roll it, fold it, quarter it, and mess it up as if there is no tomorrow. 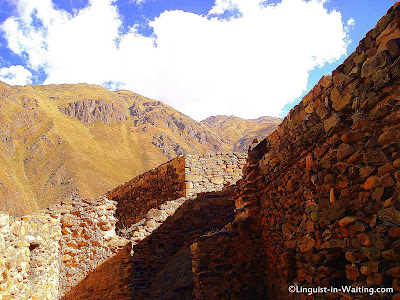 (Mountains and Walls, from my Ollantaytambo Series)