Religion and the Filipino

So I am on the road. Currently, I am in Iloilo City, in the Philippine region known as Western Visayas. As it is, it's an urban city, but compared to Manila, it's still quite a few years behind.

Speaking of being behind, perhaps one of the things that are prominent here is religion. There's quite a few time-ravaged churches here. Not that I attach any negative connotation to this, in fact, there's nothing wrong in having time-ravaged churches. What's amazing actually is that there's this sense of time stopping, as people have been acting like they have been ever since.

But as I have been visiting these old churches, I have made an observation regarding the people who utilize these places of worship. They are rather devout, and many people are actually serious about their religion here.

For instance, in two separate occasions, I have observed bunches of ladies and their children in church, reciting the rosary. First, I saw it in one church in one part of the town, and then I saw it again in another church. It's always in the afternoon, I don't know why, but there's always a group of women. Perhaps two of them, both mothers, and at least four children in tow. They are sitting in front of the church, chanting in unison, something about Mary being blessed, Mary being awesome, Mary being the protector of all the other women and children out there.

Anyway, I won't make any comments about how religion is correlated with lack of progress and state of livelihood. The direction of causation isn't clear on that yet, but I definitely have a few data points showing the correlation.

Now people might ask, if I am so against religion, why am I visiting these places of worship? Because even though I do not believe in religion, I know that religion is a big part of human behavior. Religion is part of culture, and as such I think it is worth visiting. I am amazed when I see old churches by the wayside, still standing after several typhoons and hundreds of years. It just shows that people attach importance to these, because everything else got torn down and reconstructed, and yet their place of worship, their sanctuary, is still standing. 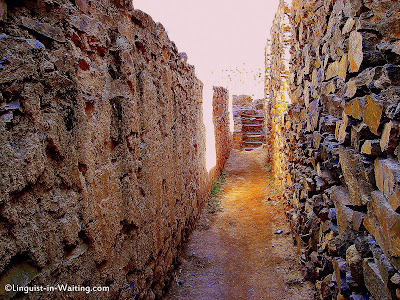 (Path II, from my Ollantaytambo Series)