Turtle Blasts from the Past

The other day, I was checking out my parents’ old house, rummaging through stuff. I found old stuff of mine, like my yearbooks from high school and college, and also this one scrapbook that was made by my friends from Japan, when I left high school there as we were moving from Osaka to Guam.

So here’s the question: should I keep them? Or should I throw them away?

I am actually one of those people who keep no clutter at all. I am not a hoarder. Due to the fact that I have already experienced a total of eight different international moves (Manila-Denver-Manila-Hawaii-Manila-Osaka-Guam-Manila-Buffalo), I am used to the idea of packing my life in boxes and moving, uprooting myself and replanting in another place. Thus, when you do this over and over again, you learn to throw away a lot of things, as the less stuff you have to pack, the less luggage and the easier the whole process becomes. And related to that, you also learn to not stack up a lot on things as well.

In fact, I don’t have a lot of physical reminders of my childhood. I remember helping a friend move one day, and he had plenty of boxes that contained memories, stuff that had some historical and sentimental value, and he had plenty of them. He wasn’t from the area as well, but his hometown was just the next state over. My hometown is 12 time zones away.

So, as I was exploring the old house of the parents, I discovered my old yearbooks. Apparently it’s still saved there. I also saw this old scrapbook that my friends from Osaka gave me. They made it for me as I was leaving Japan, since I spent two years with them in high school and they were sad at the fact that I was leaving. I read them, and it was quite fun, you know, re-living those memories in my head, giggling at my stupid hair pictures.

The thing is, if you ask me, right now, I don’t know these people anymore. I used to keep up with a few of them in Facebook, but now, nothing. They are practically strangers to me now. Given that, do I still want those stuff?

Perhaps I could still keep it, just for memories’ sake. But that means that’s added clutter. Added stuff that I have to pack and carry again with me when I leave Buffalo. Do I really want that, given that I fully know that Buffalo is not my permanent home?

So I think I have an interim solution. I will leave those in my parents’ house for the moment. When I leave Buffalo, it will not be with me. But when I finally settle down to the city where I will permanently be, I’ll get those stuff and take them with me. I think that should be a solution. 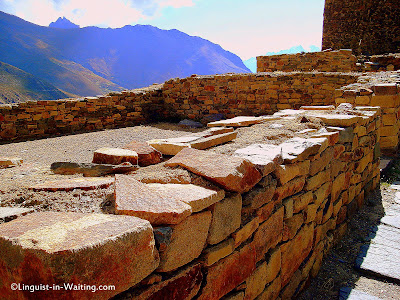 (The Patio, from my Ollantaytambo Series)