So another season of The Amazing Race has finished yet again, last month. If there was one show that I constantly watch, it’s this one. I’ve seen every season from the very first one up to now, and I am already looking forward to the next season, which apparently will air during the fall this year. I guess if someone asks me the reason as to why I like seeing the show, it’s because it takes me to places I haven’t been to before. And given my propensity to travel, I like seeing things that I haven’t been to before, perhaps to get an idea of where to go next.

Anyway, this season is a return season, that is, former teams that had failed in winning were given a second chance to go and race again. I guess it was similar to the All Stars season (Season 10), except that for this one, there’s a theme. Teams that made mistakes in the past were invited to go back and race. Teams that got eliminated because of a bathroom break, teams that somehow lost their passports, teams that had communication breakdowns, teams that got lost since they read a map incorrectly, teams that had bad luck in taxi drivers, and so forth. So they selected 11 teams that had unfinished business, so to speak, and they got to race yet again.

I actually loved the route they took this time. It started by making them fly westward, which in my opinion, is usually harder, than if they flew east- or southward. It used to be the case that people flew to Europe first, and communication usually is easier, and there are more teams. As the teams get eliminated, they start going to Africa or Asia, and that’s when communication with the locals get harder. However, this time, they went to Asia while there were still quite a few teams in the race. Granted, they first went to Australia, which was an easy leg.

Nevertheless, the race was quite extensive. They went to Australia, Japan, China, India, Austria, Liechtenstein, Switzerland, and Brazil. The only thing I would complain about is the fact that they keep on visiting China and India. These two countries are the ones that are most visited in the history of the race. Granted, these are big countries as well, and there are plenty of places to go to inside them, but there are other destinations out there as well that perhaps would be nice to see. Indonesia for example, hasn’t been visited at all, and so is Colombia. If safety is an issue, there are still other European countries that hasn’t been featured yet, such as Bulgaria.

Perhaps the reason why this show is still running strong even after 18 seasons is the fact that it is simply a wonderful thing to see how other people travel. Of course, there’s stress that is involved in travel, but it’s added stress whenever there’s a million dollars at stake. You see these teams of two people, sometimes they bicker, sometimes you think they’re acting so irrational that you think why do these people even exist, and it’s just fun watching those people travel. Sometimes it makes me think that these people need to boost their travel IQ, although given that this season consisted of teams who were already in the race before, there wasn’t much of that. Sometimes you see human behavior that is so annoying that it must be embarrassing to be an American sometimes. You see teams that treat locals quite harsh and rude. Sometimes you see behavior from the contestants that make you think that you’d just want to get in front of them and punch them in the face.

I actually liked the outcome of this season. Unfortunately, the cowboys didn’t win, and I was rooting for them. They perhaps were the best racers of this season, yet they made a mistake at a crucial point in the race, when they got lost and another team forced them to do a U-turn. However, perhaps due to some desire to see that the annoying teams don’t win, I am glad that Kisha and Jen won this season. I didn’t want Kent and Vyxsin to win, as they were rather annoying with respect to their team dynamic. I also didn’t want the Globetrotters to win, as they were quite full of themselves. So after the cowboys got eliminated, I was fine with either Zev and Justin winning, or Kisha and Jen. Gary and Mallory were okay, but somehow I feel like Mallory needed a little training in shutting her mouth. Her personality was just too outgoing and open, that I felt uncomfortable watching her.

Oh well, the race has ended. But I am already excited about the next season, which is apparently filming this summer, and will be aired this coming fall. 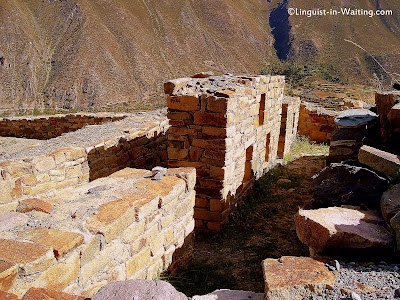 (Rooms in Ruins, from my Ollantaytambo Series)