Divorce and the Philippine Dark Ages

Two months ago, Malta voted on a referendum to legalize divorce, and it passed. This leaves just The Philippines and Vatican City as the two countries in which divorce is not legally permitted.

Now that sucks, isn't it? Not that I want to divorce someone in the near future, but perhaps what sucks more is the reality that the Catholic Church holds a lot of force in Philippine society. First, there's the sex education policy. Then there's the RH bill. Finally, there's divorce, three issues where the Catholic Church tries to meddle into and oppose.

But wait, didn't Jesus say something along the lines that his kingdom is not a part of this world? Maybe these Catholic god experts should review their Bible, and read John 18:36 once again.

But no, these Catholic god experts think that they know better and that it is appropriate for them to meddle into the Philippine social policies, even advocating civil disobedience as a measure against the Reproductive Health Bill. Isn't that crazy?

The thing is, I don't mind legalizing divorce. Whoever said that love is forever needs to get his brains checked. Nothing is forever. Things change. Love happens, and love disappears. A husband that used to be this dashing gentleman can one day turn out to be a nightmare from a horror movie.

The frustrating thing is that the Catholic Church actually is this arrogant bastard, thinking that it is the sole authority on people's lives, and doesn't mind dictating how other people should live. One would like to reason with them, but alas, anyone thinking that they have a direct hotline to god is not worth the spit that one would use in trying to reason with them.

I suppose it might be inferred that I don't have a strong belief in marriage either. Marriage for me is simply a pragmatic thing. If two people decide that they want to be together, then go for it. The Church has no place in my bedroom. If there is a legal institution such as marriage that would be more beneficial for two people that are cohabiting, then might as well go with it. Marriage, and divorce, for that matter, should be legal institutions only, not religious ones. And it's a pity that the Philippines is the last country on earth who still thinks otherwise. 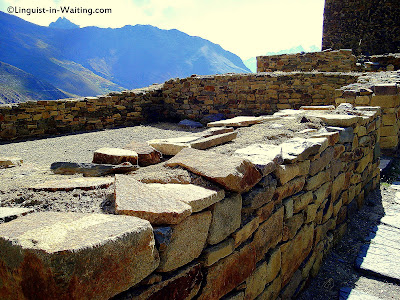 (Balcony in the Sky, from my Ollantaytambo Series)