During our stay in Las Casas, we decided to take a drive to Mount Samat. This is a mountain in the Bataan Peninsula, and is also the location of the Dambana ng Kagitingan, or Shrine of Valour. Located in the town of Pilar, this secular shrine is dedicated to the plenty of soldiers who died during World War II. Bataan, as history buffs may know, has played a major part in the Pacific Theatre, and is the location of the infamous Bataan Death March.

The shrine constitutes two elements: the towering Memorial Cross, which can be seen from far away; and the shrine and museum, which contains various memorabilia from WWII. 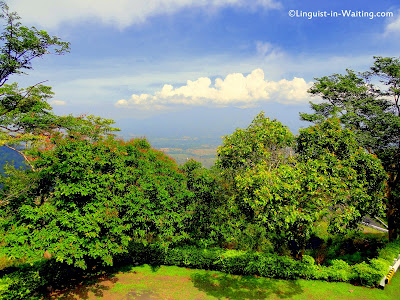 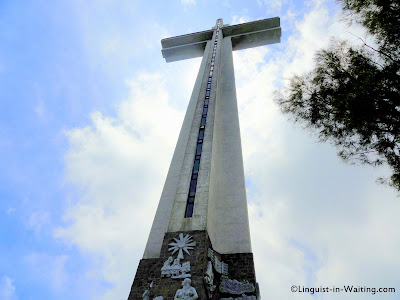 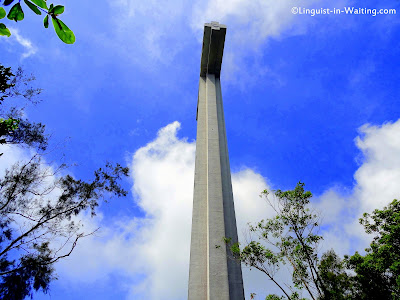 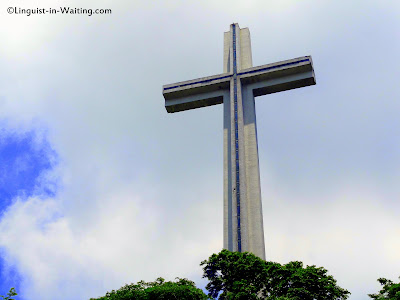 After a 30-minute drive from Bagac, where we were staying, we went up the road to Mount Samat, and reached the top. The view of the whole peninsula from the top was quite stunning, with all the greenery that are visible. And yes, there's also the towering Sentinel of Bataan, also known as the Memorial Cross, which is this mammoth cross that is planted at the summit of the mountain. I took several shots of this structure from different angles, and a sample of these photos can be seen above. 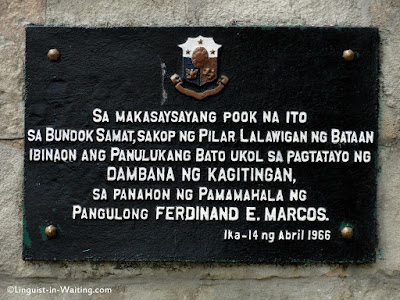 Getting closer, the base of the huge cross is actually decorated with sculptural reliefs. There's also the part where they say what happened here. The slab that is depicted above says, in English: In this historical location in Mount Samat, in the (town of) Pilar, in the province of Bataan, was buried the cornerstone for building the Shrine of Valour, during the administration of President Ferdinand E. Marcos. 14th of April, 1966. 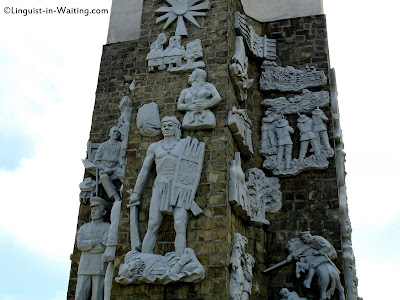 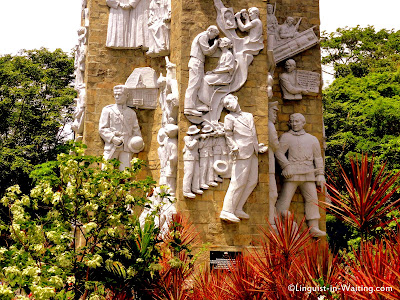 As you can see, the sculptural reliefs depict various historical scenes in Philippine history. 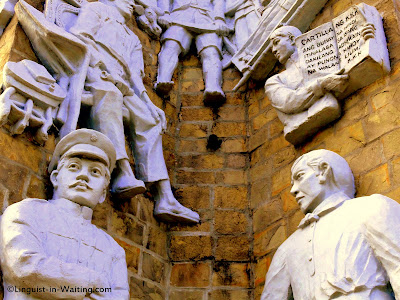 If I remember my Philippine history correctly, this is depicting Marcelo H. del Pilar and the insurgent group called Katipunan, who spearheaded the rebellion against the Spanish regime. 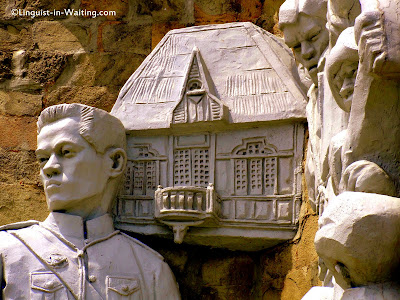 This one depicts Emilio Aguinaldo, who was the first Filipino to be proclaimed President, in his house in Cavite, in 1898. 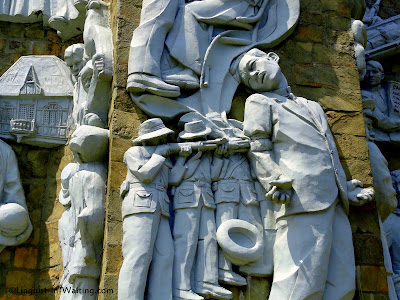 This one portrays the death of the National Hero, Jose Rizal, by a firing squad in Bagumbayan. Presently, it is now known as Rizal Park, in Manila. 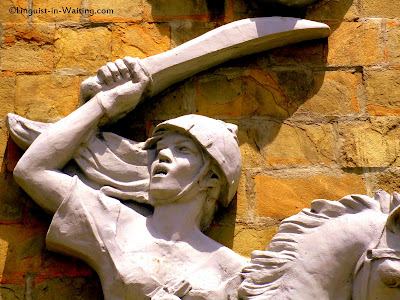 Unfortunately, I don't know who this is. 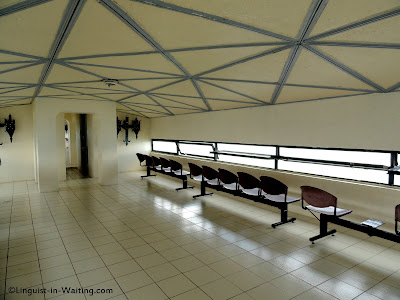 For 10 pesos, one can ride the claustrophobic elevator and go up the cross, and reach the observation deck. On a clear sky, one can apparently see the whole Manila Bay and see all the way to Metro Manila. Unfortunately, when we visited, it was quite cloudy. 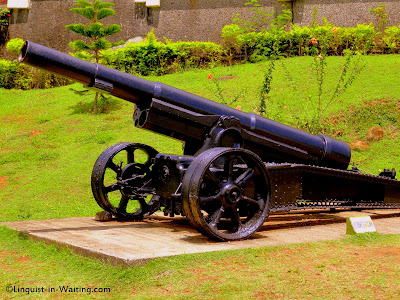 After a while, we went back to the car and drove down, to go to the shrine. The cross was located on a hill, and the shrine on the other hand was on the bottom of it, so we can either take the stairs down (which means we have to go up it to get to the car once we're done) or just drive down. We opted for the latter. Upon reaching the shrine, we saw this gun on display. I don't know what it is. 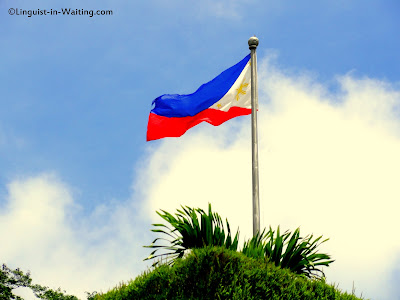 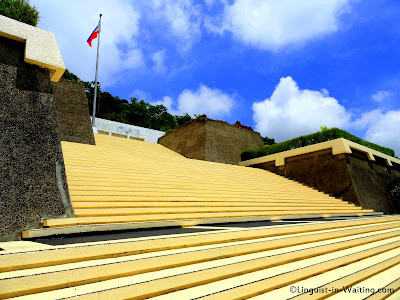 The Philippine flag majestically flies on top of it, and a long wide staircase greeted us. Ascending it, the shrine of valour is revealed. 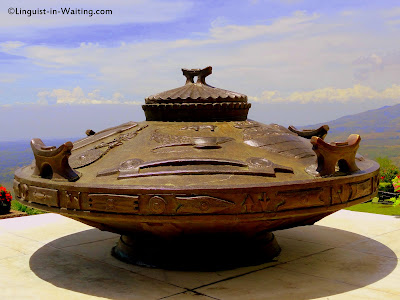 On each side of the shrine, there's these giant bronze urns that apparently symbolizes the eternal flame. I have to say, though, that I didn't see any eternal flame that is lit, and I have to agree with Puku that they look like a flying spacecraft invented by ancient civilizations. 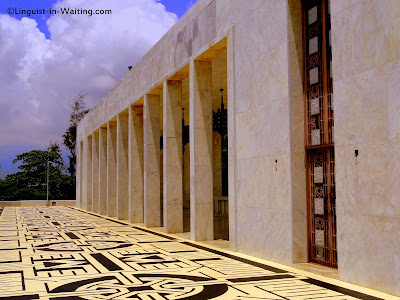 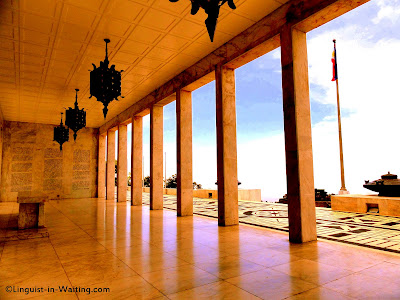 The marble structure is huge, and there is a narrative of the Bataan War that is etched on the marble walls. There's an altar inside, although it looked more secular than religious. I suppose it was meant to honor the fallen soldiers, regardless of religion they belonged to.

Overall, that was our trip to the Shrine of Valour. It was quite interesting to visit it. Not a lot of people were there, although given the relative isolation of the place, that wasn't surprising. What was surprising was that there was a lone American who visited the area. And there wasn't a sign that he had private transportation, which meant that he took the public transportation and hiked the mountain to get there. That's impressive.