The Mounties and the Visa

Ah, finally, the three pieces of documentation that I need for this upcoming conference trip is set in place. I now have a new Canadian visa! Let me explain why that is needed.

I also need a Chilean visa, as Chile requires one from citizens of the Philippines. That is the reason why I was in New York City a few weeks ago, as I applied for a Chilean visa. So that piece of the puzzle is now set in place.

Now, I didn't mention before that when we booked the tickets last May, we actually looked at several options. We looked at how much it would cost to fly from Buffalo. And we also looked at how much it would cost to fly from Toronto. It turned out that flying from Toronto is about 400 USD cheaper than if we fly from Buffalo. Here I was thinking that if I do that, I will need a Canadian visa, as my previous one expired in June 2011 as well. I also thought that I usually go to Canada often anyway, which meant that I probably will be getting a Canadian visa independently anyway, so even though I add up the expenses of getting a Canadian visa, the cost is still lower than if I fly from Buffalo, and I would be hitting two birds in one stone. So we decided to book it: we're flying from Toronto Pearson International Airport instead of Buffalo.

Cristin is American, so she doesn't have a problem with visas (the only wrinkle being that she has to pay a 140 USD entrance fee in Chile, which is the equivalent of how much the US government charges Chileans to get a US visa). However, I needed a Canadian visa. So I figured that I'll get that once I get my Chilean visa. After all, there's a consulate in Buffalo. It's an easy process, as the last two times I got a Canadian visa, all I needed to do was turn in my documents and I would get the visa within the same day.

Now lo and behold, I checked their website, and it says that it takes 30 days to process. WHAT!!! 30 days! I checked the calendar and I only have about 33 days before I needed to use that visa. So I sort of panicked. This was during the Fourth of July weekend. I immediately assembled the documents with the intention that when they open on July 5, I would be there to submit my paperwork.

In the meantime, I was stressed for three days. I only saw the website on Saturday, so there were 3 days before I can do something about it. I actually went running on Saturday evening, after I finished filling up the forms. I was so antsy I tried reading a book, but nothing was getting in. So I just turned my antsy energy into exercise.

On the morning of July 5, I asked Cristin to drive me downtown, so that things would be faster. First, we went to the post office to get a money order. The post office opens at 8:30 AM, while the consulate only accepts applications 8:00-10:00. We went to a post office near the consulate, so after getting the money order, I still had a little over an hour to spare.

I reached the consulate at 9:00, and saw this big line. Wow, there's a lot of applicants. As I was surrendering my phone, I heard someone on the counter tell the applicant to come back the next day. Is that a good sign? Or a bad one? They say 30 days on the website, does that mean that it's just 2 days now?

The queue extended all the way to the end of the room, and so I just queued and took out my book. After an hour, I finally reached the counter and turned in my documents. The officer asked me why I needed a visa, and so I told her that I have two reasons for needing a multiple entry visa. First, I told her that I have close friends who live in Toronto, and second, I told her that I would be transiting through Toronto Pearson International Airport next month. I had photocopies of all the supporting documents, and so she took them as well. Then she told me to sit down until my number was called.

Two hours later, my number was called. They gave me a multiple entry visa, valid until June 2012. Yay! It was still same-day processing, contrary to what the website said. I was so happy. I thought that I had this narrow no-mistakes-allowed window where it's all or nothing, and yet the outcome was awesome. I am one of those people who have several plans, Plan A is there, and if that doesn't work, there's a Plan B, but this time, I couldn't make a Plan B. Good thing it all worked out well.

Thus, now, all documentation is set in place. I can visit Canada and my friends again, and I can fly to Chile through Canada, and save 400 USD. Funny though, because our itinerary takes us from Canada to Chile via the United States, which means that we will exit the USA to Canada, and re-enter it again on our way to South America, as the USA doesn't allow airside transit (transit passengers still enter the USA and pass through immigration and customs). Thus, overall, there will be six borders to be crossed, by plane and by car (we are driving to Toronto Pearson International Airport from Buffalo, and we are routed to fly Toronto-New York City-Lima-Santiago-Miami-Toronto). I am pretty sure the border patrol people would be confused. But that will be a different story. 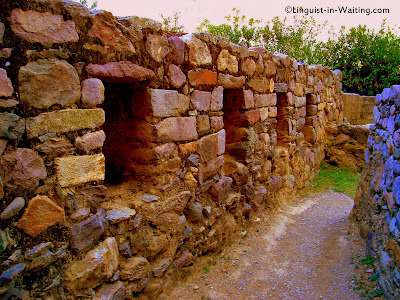 (Path Through the Stone Windows, from my Ollantaytambo Series)