The Tokyo Transit Shuffle Part I: The Bizarre Feeling of Being Left Behind

So I find myself stuck in Tokyo. How's that?

Well, one fine day, I was supposed to fly to Buffalo from Manila, via Tokyo-Narita and Washington-Dulles airports. My first leg would be on the Japan Airlines 746 flight; it leaves Manila mid-morning and arrives in Tokyo-Narita early afternoon. It's just in time for me to catch the United Airlines 804 to Washington-Dulles.

That was the plan. However, little things added up that resulted in me getting stuck in Tokyo, for a day.

So the United Airlines flight departs from Terminal 1, but the Japan Airlines flight arrives in Terminal 2. I had to take the inter-terminal shuttle, but it only runs every 15 minutes. Not a problem, yet. I initially thought that I would have an hour and a half in Tokyo, and that would be enough to go between the two terminals.

However, I see in the gate monitors that the flight was moved early. It now departs 15 minutes earlier than I thought, and given the schedule of the buses, I only have one hour to make my connection. Still no problem, right? I guess my plan to pass by a bookstore and get a book to read for my flight would have to be postponed.

Then I find the flight connection counter. Back in 2007, when I did the exact same route, I had to get a new boarding pass in Tokyo for my United Airlines flight, as Japan Airlines in Manila obviously cannot issue a boarding pass for a different air company. I remember getting it in the connection counter, and yet here I see a long line of people. Why?

Oh, the United Airlines flight to Los Angeles has been canceled, and people are trying hard to get booked to another flight. And I still need a boarding pass.

Fortunately, someone told me that I can get the boarding pass at the gate. So I went to the gate, and lined up. However, the line was slow, in fact, it wasn't moving at all. And guess what, the flight is already boarding. When I finally got to be assisted at the counter, the flight was already in Final Call.

And then the agent hands me a hand-written boarding pass. What? Seriously? Apparently, there's a problem with the printer, which is the reason why everyone is so slow. And while I was at the gate, another agent announced that they are looking for volunteers to take a later flight, the next day. So, I was there, with a hand-written boarding pass, a bumped seat (they took my original seat as I was rather late in getting a boarding pass since the line wasn't moving at all), and a flight that was about to depart anytime soon. Not to mention that they still haven't found my luggage from the Japan Airlines flight. So I volunteered.

And they were happy.

After giving my seat to the other passengers and waiting for the phone call from someone that they found my luggage and is off-loading it, they gave me a hotel room, and another reservation for a flight the next day. So, instead of flying through Washington-Dulles, I am now flying to Chicago-O'Hare, followed by a flight to Buffalo. I am delayed by one day in arriving, but hey, I don't have any appointments. Oh, and I get to visit Japan again, after a absence of 11 years.

So yes, they gave me a shore pass, and I have a stamp in my passport. As I was watching the flight move back from the terminal, I guess I felt this weird feeling of being left behind. You see all these people entering the aircraft, and you're just there, sitting at the side, waiting for your name to be called. Then you see the aircraft push back, and you realize that you are still here. You're not going anywhere.

I guess there have been plenty of opportunities in which I was the one that left and flew away. It's these rare instances that make me realize how the other side of the fence feels.

Oh well, I'm here in a hotel near the airport, with a couple of meal vouchers, and a free hotel room. I'll be in North America the next day, hopefully. 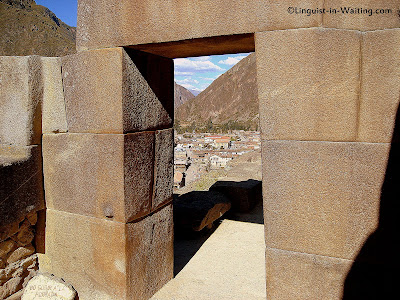 (Polished Doorframe, from my Ollantaytambo Series)