The Tokyo Transit Shuffle Part II: The Romance of Travel

So here I am again, in Narita International Airport, trying again to fly to the United States. After spending a night in Japan, here I am attempting to cross the Pacific Ocean once again.

See, yesterday I stayed in the Hotel Nikko Narita, courtesy of United Airlines. They gave me a free room and two meal vouchers. And in the morning after, I even had time to visit a nearby temple. Imagine that! I think overall it was an awesome stop-over. Oh, needless to say, I got a new stamp in my passport.

So now, I am waiting in my gate. Waiting for a flight to Chicago. I suppose I have reached the point in which I sort of don’t know where I am flying to anymore. I know I am heading to Buffalo as my final destination, yet it’s now a haze whether I am flying via Washington DC or Chicago. It is all the same in my head now. Perhaps that’s the side effect of being on the road more than the average person.

I remember back in the days, when my travel record isn’t that high yet. I was so excited whenever I would be riding a plane. I would be so nerdy and geeky that I would pay attention to all the little details. I would know what kind of plane I would be in, I would know where I would be sitting, and I would be so particular with respect to getting a seat next to a window. I was a little kid, and the excitement level was high. But I guess, not anymore.

Now, sometimes, I feel, I’d take any flight, I’d sit on any seat, just to get to where I want to head to.

So perhaps that is the reason, the reason why I decided to speak up and volunteer my seat the day before, when they were looking for passengers to volunteer their seats, as they were overbooked due to a canceled flight. At first, they told me that I would get a hotel and meal vouchers only. I guess I was fine with that. At least I get to see Japan again, after being out of the country for 11 years. And after spending a day, I never regretted it.

But surprises of surprises, when I checked in for my flight, the agent told me some good news. Apparently, they were giving me Economy Plus seating for this return flight. More leg room! It’s not that I need it, but other people pay extra for this; I actually looked and people actually have to pay 119.00 USD to get an Economy Plus seat on the flight from Tokyo to Chicago. And I got it free, simply because I volunteered my seat and decided to stay a day.

But there’s more. The agent told me that United Airlines is giving me a flight voucher that is worth 400.00 USD, which is valid for one year. Awesome! That, plus the miles that I already have with them, and I think I have my winter vacation taken care of! I guess United Airlines knows how to take care of its customers. Needless to say, I let the agent know this; I know that this profession usually deals with a lot of shit, and it is nice to get a compliment once in a while, thinking that if I were in the agent’s shoes, I would definitely appreciate it.

So, here I am. Waiting in front of my gate. Earlier, I passed by a bookstore before passport control and got a new novel, finally. Then, I went to Immigration and had my passport stamped. Goodbye Japan, until we meet again. It’s unfortunate that I was too small to appreciate you 11 years ago.

I have about a little less than 3 hours before my flight departs. I’ve walked around this airport quite a bit now. I saw the Turkish Airlines flight to Istanbul taxi and depart. The passengers that will be boarding the MIAT Mongolian Airlines are checking in now. Earlier, as I was falling in line at the check-in counter, the people in front of me had bags with addresses in Cheektowaga, New York. I told them that I am a Buffalonian as well, and learned that they consider Buffalo as their hometown, but are flying to Seattle. And now, I see the Lufthansa flight from Munich pull up to the gate. Earlier, I gazed at this huge screen displaying all the flights from the terminal, going everywhere, and felt that weird sense of excitement again, that excitement that I perhaps momentarily lost.

Travel is awesome. Seeing the world is awesome. I hope that I would always feel that way. 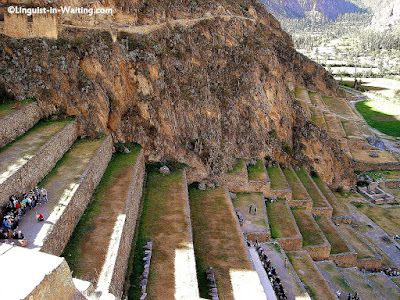