The other day, I was in Toronto (again). I spent 3 days with two of my close friends, as they are preparing to move to their new house. Until now, they have been living in an apartment in Toronto, but they bought a house in the same neighborhood, and will be moving in soon.

Thus, before the move, there are several things that need to happen. Mostly, there are things to clean in the new house, and that was where I contributed by efforts. I was cleaning the cupboards in the kitchen when there was a thought that occurred to me. And it was a weird thought, actually.

The house was near a park. It is located in a cul de sac. There are plenty of kids in the area. And as I was gazing out the kitchen window while washing the washcloth, I had a thought to my head. Here I was, with my friend and his partner, in their house. They're both ready to settle down in a city of their choosing. But I on the other hand is still floating around.

Well, not really floating around, as that somehow implies that I have no direction. I do have direction, but I don't have a destination, yet. For some reason, I thought about that. I am hopefully one year away from graduating. After graduation, what's next? A post-doc? A faculty position? A research position? Where? In North America? In Europe? In Asia? The options are endless.

And honestly, at this point, I don't know. I see kids in the park as I gaze outside the window. I see a bunch of squirrels running around in the backyard of their house. I was thinking wow, they have a backyard! And here I am not even knowing where I would be the year after this one.

Do I regret my life decisions? Not really, I actually like where I am. However, sometimes I amaze myself at the way the cards fell into place. Who knows, I might end up having a house in the future, maybe a condo. Maybe that's where I will settle. But at this point, that's a big black hole in my future.

My friends might be getting a house, but for me, I am still running, running away, knowing that Buffalo is temporary. And for some reason, I don't know my destination yet. All I know is that I am gonna hit this ground running. 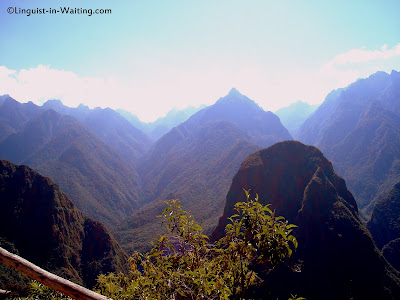 (The Mountains, from my Machu Picchu Series)