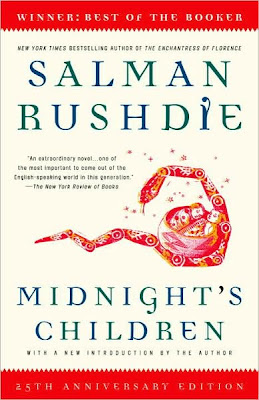 An edited version of this article was first published as Book Review: Midnight's Children by Salman Rushdie on Blogcritics.org.

Sometimes, I wonder how authors like Salman Rushdie come up with books like these. I mean, one cannot help but give credit to authors who have the ability to come up with a bizarre yet fascinating premise, and turn it into 530 pages of pure art.

So, I suppose I have made it clear that I liked this book, but first, a little synopsis.

This book is set in the Indian Subcontinent, starting from a few years before 1947. After setting the stage for the entrance of Saleem Sinai, the main character, the adventure begins, complete with Rushdie's trademark thick and dense frame narrative, mixed with a big dose of magical realism.

See, as India prepares for independence in 1947, the emerging government decides to personify the country's independence, by announcing that the children who will be born on the hour of India's independence in 1947 will be special (hence the title of the book). Yes, they are special, but way more special than how the new Indian government intended it to be. This is where the magical realist part of the book kicks in, and with fascinating results.

There are plenty of midnight's children, but the book centers on Saleem, the pathetic protagonist. He is hardly the protagonist that one would want to admire: he is rather physically deformed, he faces a barrage of bad luck, and his special powers for being a child of midnight is sometimes more a curse than a blessing. Through his life, India's birth into the world is also mirrored: India's ups and downs are physically manifested into Saleem's being, which is a literary device that I thought was quite innovative.

Compared to the other books by Rushdie that I have read, the complexity of the frame narrative here is less, and perhaps more accessible and not so much taxing to the reader's long-term memory. Unlike The Satanic Verses and The Enchantress of Florence, the narration here is more linear than hierarchical. It is simpler, but I think that is a necessity here, given that the story centers on the lifetime of a certain character, and life stories are perhaps easiest told in a chronological fashion. However, the temporal structure might be a simple one, but Rushdie makes up for it by making every step a dense and heavily-detailed story.

What I appreciate most about this book perhaps is the level of detail: this book definitely feels like a well-researched one. I constantly find myself looking up external sources as I tried to differentiate the real historical events in India and Pakistan from the fiction. I specially admire fiction that successfully hides itself between the folds of history, and this one definitely is a good example of that, considering that this is a magical realist book, as the magical elements somehow found a direct counterpart in the various aspects of South Asian history, one example of them being the controversial family planning methods that were enforced to control the population.

To end this review, I should mention one little hesitant criticism of it. As much as I liked reading Salman Rushdie, this perhaps is not my most favorite book. This does not mean that the book is bad; rather, of the three awesome books of his that I have read at this point, this is not the book that I like the best. I remember just spending 4 days to finish The Enchantress of Florence, which was a book that I had a hard time putting down. This book, on the other hand, perhaps, lacked a certain oomph, that I as a reader wasn't forced to turn another page and read on even though it's already way past my bedtime. Perhaps it is because it is due to the fact that the narrative is just too heavy and dense and filled with material, that it is actually exhausting to read a chapter of this book. I do admit, though, that from a different perspective, this aspect is what makes this book a masterpiece.

So overall, I am giving this 4.5 out of 5 stars. It is a book I would recommend to anyone wanting to read a masterpiece, but I won't suggest this to people who are not yet familiar with Salman Rushdie's writing style. 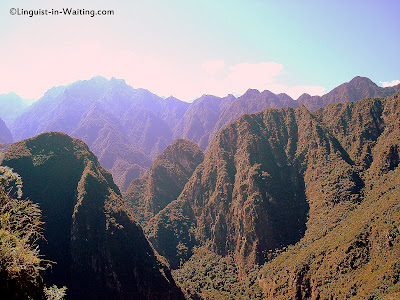 (Frolicking in the Andes, from my Machu Picchu Series)