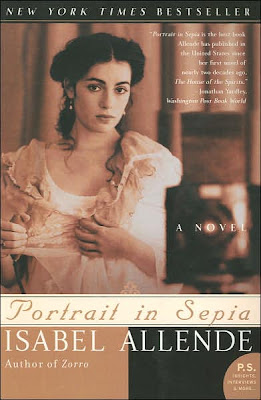 An edited version of this article was first published as Book Review: Portrait in Sepia by Isabel Allende on Blogcritics.org.

This is one of those books that feels like an eternity has passed once you finished reading them. It has nothing to do with the length (the book hovers just around 300 pages), but it has more to do with the content, as this book spans 5 generations of the Del Valle family, as its members live in various places of the world.

The book is divided into three sections and an epilogue. The three sections correspond to the years 1862-1880, 1880-1896, and 1896-1910 respectively. These dates make sense from the perspective of Aurora del Valle, the omniscient narrator who provides the reader with insight into the family. Aurora is part of the fourth generation, but the book begins the narration even before she was born, which consists the bulk of Part 1.

Part 2 narrates Aurora's birth up to when she turns 16, but most of the narrative focuses instead on the adults during that time period, which are the ones belonging to the generation above. As Aurora matures, finally the novel shifts focus on her, in Part 3, when she gets married and moves out of the family mansion.

I will not attempt to provide a synopsis much detailed that the one I have already given above. Instead, for the latter part of this review, I would like to focus on the literary facets that I found admirable in this novel.

First, I have noticed that regardless of which generation the narrative was in, the focal point was always on the women. Women are strong characters in this book, and with a few exceptions, the men were just assistants by the wayside, or worse, despicable pigs. In every generation, there was a strong-willed woman, and clashes between women were always the source of conflict.

As an example, Paulina del Valle is the matriarch, who guides her family and her estate into success, while navigating the perils of war. It is noteworthy to point out the significance of this character in a very male-dominated society, such as Chile, where it is set. Having a strong will is definitely a characteristic of the women in this novel, and this is also exhibited by Eliza Sommers, who is Aurora's grandmother; by Nivea del Valle, who is Aurora's aunt; and by Aurora herself.

Perhaps it is because the author is Isabel Allende, who is a feminist, but this book is full of feminist overtones. Not only are the women characterized as very strong-willed, but men were cast in a negative light, with a few exceptions. Paulina del Valle's three sons were good-for-nothing philanderers, and Aurora would find herself in an unlucky situation with respect to her husband, Diego. Not that I take issue with this sex-based divide, but I do acknowledge the historical import of this: in turn-of-the-century Chile, society was still dominated by men, and women were merely seen as ornaments and only belonging to the domain of the house. Looking back, I am actually glad that I live in the present day, where human rights have advanced and as a bit better compared to back then. I would not want to be born a woman during those times.

Unlike typical novels, this novel doesn't have the traditional story-arc: there isn't an introduction, a middle section where the tension rises, and a conclusion where every conflict gets resolved. No. Perhaps it is because of the content, but since the novel is in some sense a historical account of the Del Valle family, there cannot be a three-part story-arc. Instead, every part of the novel is a story-arc, containing its own conflict. I found myself reading page after page with relish, as I was lead into the world of this turn-of-the-century family, with their adventures spanning three continents.

Overall, it was a wonderful read, which I recommend to readers who would be interested in a historical novel such as this one. I give it 4 out of 5 stars. 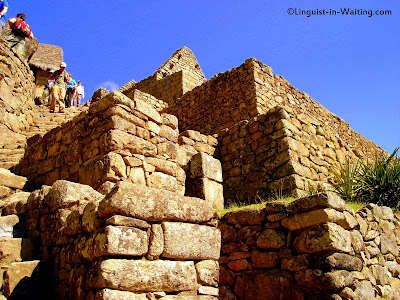