Murphy and the Return

So the other day, I was wondering about bad things, unfortunate events, unlucky occurrences, and so forth. Not that I believe in luck or anything, but sometimes, bad or undesirable things can definitely pile up one on top of another. In fact, I remember that this exact thing happened when we were flying back to the United States from Chile.

See, it started as a good day. We flew back August 17, 2011 (yes, I am only writing about it now; it shows how much of a backlog I have when it comes to blogging). Our flight was routed Santiago-Miami-Toronto, and we were then driving back from Toronto to Buffalo.

The first flight was scheduled to depart 8:55 PM, Santiago time. However, we pretty much were ready to leave early in the morning. We had to check out of the hotel by noon, and since we didn't have anything else we wanted to do in the city, we basically checked out by 9:00 AM, after having breakfast and a shower. We rode the metro up to Pajaritos Station, and then transferred to the bus that connects that station and the airport terminal. No incident yet.

Then, we planned to just stay in the airport and work. We both had laptops with us, and all we needed to do was find a place where we can park our butts and work. Ideally, there should be power outlets. However, the airport lacked a bit of working space, and there were not enough chairs. So we just wandered around, I read a book, finished it, until it was time for lunch. Wait, I should say that at first, I thought that I found a place where we can sit and work, somewhere in Arrivals, but it turned out that the outlet was not working. There was no electricity coming out of the outlet. That sucked.

Anyway, we had lunch. In a cafe in the airport. I suppose airport food always suck, as this one had a nice menu but that was about it. Oh well, after lunch, and waiting another hour, we finally were able to check in. Since our flight didn't depart until the evening, we had to wait with all of our stuff, wandering around the airport. We were the first to check in for our flight.

Then, when we checked in, that was fine, or so we thought. Our bags were now in the system, and all we had were carry-on luggage. We entered the secure zone, had our passports stamped (ah, we're outside of Chile by now), and found a Starbucks. Finally, they had chairs and power outlets. They had a password in order to connect to the Internet, but that was simple.

We boarded the plane, and 8 hours later, we were in Miami. We went through immigration and customs, and waited for our bags, but it never showed. When we told this to the officials, they said that since our final destination was Canada (sure, they don't need to know that we're driving back to Buffalo), the bags would just show up in Toronto. Okay, that was not a problem.

We had about 5 hours before our next flight. The flight to Toronto was supposed to depart 10:50 AM, arriving in Toronto about 3 hours later. So we planned that we would have lunch somewhere in Toronto. However, that didn't happen.

Well, there was a problem with the plane. The toilet was broken. So they had to call a mechanic and check it out first. That took an hour. So we were delayed by an hour. We arrived in Toronto hungry and tired.

So we were waiting for our bags to show up. But guess what, it never did. We waited and waited until the luggage belts stopped moving. But our luggage never showed up. Both of our luggage didn't. So we filed a lost bag report, and since we were driving back to Buffalo, we requested that they forward it to Buffalo International Airport instead, thus avoiding the need to drive all the way back to Toronto again just to pick up the luggage.

By the time we got out of the airport, we were so hungry. And the rush hour traffic was also starting to pick up. So we drove in the direction of home instead, hoping that there would be a place to eat along the way, as we didn't feel like getting stuck in Toronto rush hour traffic.

While in Mississauga, we found a churrasqueria, a Portuguese outfit, and that was actually good. The people were all Portuguese, and they served rather better than average meats. That was our lunch, but felt like dinner.

After eating, we got back to the car and drove back. However, by the time we were in Burlington, a huge hailstorm appeared. We actually couldn't see anything in front of us, and traffic stalled. We almost thought that the windshield would be broken, because the hail made the most frightening rattling sound ever. There were accidents on the road; a huge truck jack-knifed on the other side of the road, sending books sprawled along both sides of the road. It was quite an adventure.

Anyway, we reached home, after a rather incident-heavy trip. Our bags arrived 3 days later, when someone called us saying that the bags are already in Buffalo. I have to say that this was the first time I lost a bag while traveling, but I suppose I am glad that I got everything back.

So yes, that was a very eventful trip. We got tear-gassed, we presented talks in a conference, we explored Santiago and Valparaiso, and had a long and tiring trip home.

Am I doing it again? Why not? 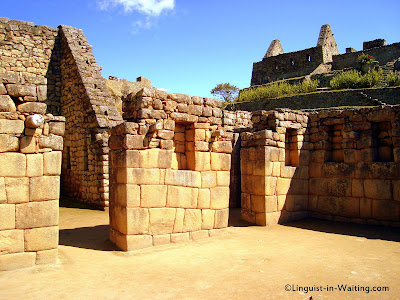