The other day, a friend of mine and I watched Hedda Gabler, which is a play by the Norwegian playwright Henrik Ibsen. I haven't been to the theatre recently, so I was quite looking forward about this.

I have to say, I knew nothing about this play. It was just a spontaneous decision to watch it. We didn't even have tickets before, we just headed to the theatre hoping that there were still tickets for that evening. It turned out there was, and so we were able to watch it.

So, Hedda Gabler is a psychological thriller about emotional manipulation and personal freedom. The main character happens to be a female, who, during the time this was written, females were rather subdued and second-class compared to males. Hedda Gabler is rather modern for her society: she doesn't like to be relegated into the background, and therefore she decides to manipulate the people around her. However, this brings drastic effects.

I loved the way that there wasn't a main character that is easily likeable in the story. Every major character had a flaw of some sort, whether it is alcoholism, geekiness, or just a propensity for manipulating other people. Evil was oozing out of every person in the story, and it was just quite a treat to watch.

I also liked the production of this play. The play was directed by Kevin Leary, a graduate student. The costumes were perfect, and I liked that the costumes by Hedda Gabler contrasted quite well with the costumes of the rest of the cast. The lighting and stage set was also rather appropriate. As much as this is a student production, I have always been impressed with their productions, that I make it a point to attend every production.

So yes, after watching this play, I was glad I did. I haven't been familiar with the works of Henrik Ibsen at all, but watching this made me curious about his other works. 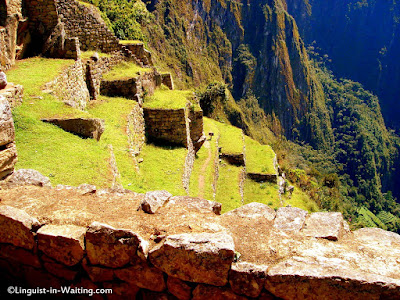 (The Green Expanse, from my Machu Picchu Series)