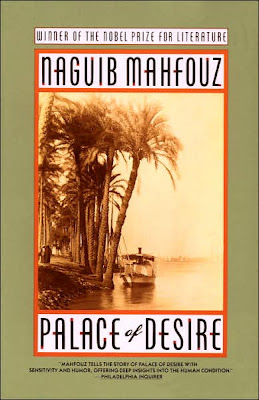 An edited version of this article was first published as Book Review: Palace of Desire: The Cairo Trilogy, Volume 2 by Nagib Mahfuz on Blogcritics.org.

What happens when an idealist becomes cynical and jaded? What are the events that might trigger one to abandon one's hopes and dreams and instead face the world with pessimism and hopelessness? This book is an exercise in this thought experiment, as it follows the al-Jawad family, in the Nagīb Maḥfūẓ's second book in his Cairo Trilogy, entitled Palace of Desire (For a review of the first book, entitled Palace Walk, head over here).

The entire narrative of this book takes place about seven years after the culmination of the events of the first book. Within the al-Jawad family, the daughters Khadija and Aisha are now married and have kids of their own, the eldest son Yasin is already a father and divorced, while the youngest son Kamal is now a university student. The entire book focuses on Kamal for the most part, as most of the conflict now arises from his traditional and conservative upbringing which clashes with new ideas and thoughts that he encounters in the university. This provides a nice contrast with the first book: the first book focused on the al-Jawad family as a whole, and the various conflicts that this setting provides, given the tyrannical father and head of the household. In the second book, the father tames down a little bit, although he still expresses plenty of cognitive dissonance between tradition and change.

Plenty of events surround Kamal, which changes his whole outlook in life. First, his idea about love was shattered. He falls in love with a beautiful girl named Aida, and yet this goes unreturned. Nagīb Maḥfūẓ goes a long way in expressing in prose Kamal's heartbreak, and the resulting state. This leads Kamal to stop treating "the fair sex" as something on a pedestal, to the point that he is a frequent customer of whores in brothels.

His idea about religion was also shattered. He first comes as a staunch believer of Islam, going to the mosque regularly, and saying his prayers fervently. However, new ideas become available, including science and evolution, and this makes him stop believing, to the point that he feels like a hypocrite whenever his traditional father drags him to the mosque to pray.

These are just a few things that provide an interesting intellectual read for the reader. I see this book as a novel about change, and how people from various walks of life react to it. Some embrace it, as represented by the behavior of some of Kamal's friends, who enjoy going to Europe and immigrating there. Some rebel against it, as shown by Kamal's parents, who flat out refuse to accept Darwin's evolutionary theory, and state that it is false because the Qur'an states that all humans descended from Adam and not from an ape. And some become jaded, as shown through Kamal's character, as he lost all of his pillars of belief, from his idea of love, to his idea of morality, to his idea of God and religion.

Overall, I enjoyed reading this book. It wasn't a page turner; the narrative drags in parts from time to time. But it definitely mirrored my own emotional development, and for that I enjoyed this one. What I take home from this novel is that we all should form our own opinions and examine the evidence for ourselves, instead of relying on doctrines and other "truths" that perhaps was only claimed as such by others, and not by ourselves. 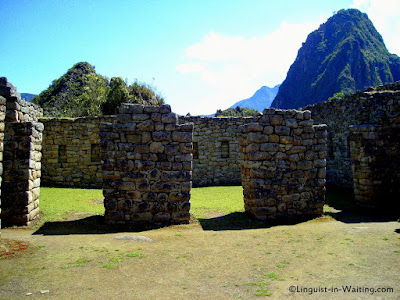 (Ruins of the Rooms, from my Machu Picchu Series)