The Year 2011 is about to end. So as my last post of the year, let me review what has happened to me, at least. I've done a post like this before last year, and hopefully I have enough to write about again this time around.

First, January started by overhauling my blog. I experimented with a number of designs, and so I did several small modifications here and there. First, I decided to chop off my entries, so that it would only display the first few paragraphs. I also limited my post schedule to two posts for every three days. After doing that, I found out that I still had plenty of things to say, that I often find myself having about 20 articles at any given time, already written and scheduled to be published in the future. I also started 2011 in Canada, when we walked over to Niagara Falls, Ontario and attended a free concert featuring Barenaked Ladies. Later in the month, I also attended a conference in Pittsburgh, where a talk had me as one of the authors. I also went to Mexico City for a vacation, and wrote about it.

February saw me attending a Rated X concert. I also saw a preview of the days to come in my inbox. I tried cooking something new, and weather was quite amusing. I also started following the Arab Spring.

During March, I had some concerts I watched, including a piano recital by Eric Huebner, a performance by Les Percussions de Strasbourg, and the JACK Quartet. I also got amused by one of Google's easter eggs. Speaking of cooking, I didn't realize that the ubiquitous Filipino dish adobo has been featured in the news. I also complained about the lack of participants in the lab. I also went to Toronto for a friend's party, and coming back, we got stuck in the QEW for several hours due to a truck that jack-knifed. Finally, the situation in Libya escalated, and I felt like I needed to talk about it.

April was quite interesting, in that it began with a rant about religious freedom, and a commentary about Filipinos. I also experienced back pain, as I accidentally pulled my back while in the kitchen. I also saw a play, which was quite relevant to me. I also was invited to join the writing crew of Blogcritics.org, as they agreed to publish my book reviews, starting from this post. Oh, someone thought that I think they are an idiot, which was totally false. I also did my tax returns, and got some money back. I also remarked about the religious stupidity of some people out there. And yes, I did some experimental cooking once again.

May found me thinking about what life is like after graduate school, while ruminating about the cultural differences within the people in the department. The semester ends, I go to Toronto again, I visit the Philippines again, and Osama bin Laden dies, making hypocrites rejoice.

June was the month when I was in the Philippines, as I had to get a new US visa. I also started documenting Buffalo sights with my Oh Buffalo! series. I also rummaged through old mementos from my parents' house. I also wrote several articles about Filipinos: how they change, how they drive rather fast, how they do not read, how religion is a big thing, and how dirty the money can be. I also started a meme, where I posted 30 songs for 30 entries.

July was the 7th anniversay of this blog. I went back to the United States, but got stuck in Tokyo for a day. The Philippines now fell behind Malta when it comes to divorce. I also got a Chilean visa, for another trip later. I posted my 6th Itchy Feet article. Finally, I also got another Canadian visa, allowing me to transit Canada once more and visit Toronto again in later times.

August was travel-hectic: I visited my sister and together we went to Coney Island, then I headed north and went to Toronto again to help my friends with their new house. I also found out about Jose Antonio Vargas and his plight.

In September, I started seeing Buffalo during the weekends. I also wondered about travel blogging and lists. I took an interest in preservation with respect to Buffalo's architecture. Of course, I haven't neglected my dissertation.

October found me wondering about Murphy's Law, given that our return trip from Chile had so many bad things. I also remarked about my new roommate and foreign students in general, with respect to culture shock and the challenge to adapt to a new environment. I attended a faculty recital, and found out that my abstract for a conference in Portland, OR has been accepted. Gaddafi also dies, and I enjoy a performance of Carmina Burana.

November made me think about groupthink and functional morality. It also found me in one of the busiest weeks of the semester. The weather was good so we decided to go to places, such as East Otto. Finally, I watched Hedda Gabler, when it was produced by the theatre department.

Finally, for December, I got new shoes, and I found out that I will be going to another conference in Germany. I also wanted to go back to being vegetarian, but I don't have the self-discipline to do so. North Korean leader Kim Jong-Il dies. I also anticipated another series of trips, both for work and for play. I also reminisced about how I hated math before but like it now, and finally, I went to Toronto again to visit my friends and eat some good food.

So that was my 2011. I am very excited for 2012, for many reasons. I already have 2 conference presentations lined up. I also am slated to graduate; hopefully that will definitely happen. I am also job-hunting, and that means that there is a possibility that I will leave Buffalo in the near future. I have come to love this city, but as much as I like it, I have to leave it and find a new home. That might happen this coming year, so stay tuned! 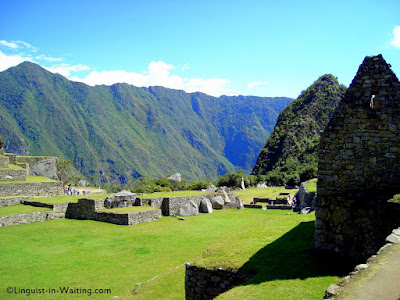 (Courtyard, from my Machu Picchu Series)