So, the news recently announced that Kim Jong-Il has passed away. Normally, whenever government leaders die, the country goes into mourning, but the after the mourning period, everyone pretty much just resumes what they have been doing. However, with this case, it is special. After all, what happens when a demi-god dies?

See, I was quite surprised by the news reports, not about the death, but about the reactions of the citizens. Uncontrollable weeping apparently was sighted in Pyongyang. People were quoted as saying I can't believe it. How can he go like this? What are we supposed to do? Other people said He tried so hard to make our lives much better and he just left like this. Frankly, there is only one word that is flashing in my head right now, brainwash.

See, I cannot believe how a whole country's population just surrendered their brains to the government, and allowed an external entity to think for them. That is quite unfathomable in my head. A question I have is that how is it that it was made possible? What did the government do to control the thought of its entire population?

I remember reading George Orwell's 1984; this happens to be the only novel that I actually read twice. North Korea is such a state, where there is a Big Brother entity, and this entity controls every aspect of your living and breathing life. So what's curious is when such an event happens. When one entity is elevated to the position of a demi-god, such as Kim Jong-Il, who has the ability to make the citizen's lives happier, the crops prosper, and the nuclear weapons tests successful, then what happens when he gets a heart attack and dies? One can just wait and see.

I find it interesting that there are people out there who can be so drunk with power. Kim Jong-Il isn't the only one here in this list. There's also Turkmenistan's Saparmurat Niyazov, who, when he was still alive, renamed months to correspond with his family members, made a statue of himself that rotated such that it faced the sun every freaking time, and even wrote a book, entitled Ruhnama, and required every citizen to read it, even stating that every person who read it three times will automatically gain access to heaven.

Frankly, these people scare me. I am afraid at anyone who is able to manipulate other people's thought processes such that everyone else is at the mercy of one's fingers. At the same time, I despise these people, who just without question, surrendered the use of their brains, and decided to be living robots, just a mere pawn in the game that is controlled by others.

So, what happens next to North Korea? I can only stand back and watch. 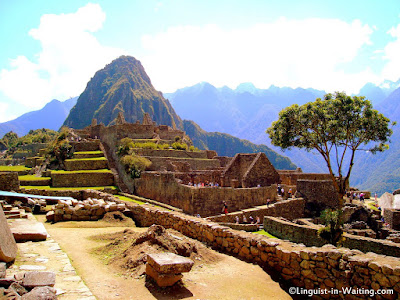 (View to Huayna Picchu, from my Machu Picchu Series)