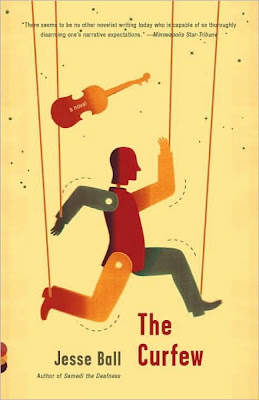 An edited version of this article was first published as Book Review: The Curfew by Jesse Ball on Blogcritics.org.

A father and daughter in an Orwellian society: what will you do if it is normal for people just to disappear, never to be seen again?

William Drysdale is a single father, taking care of Molly, his mute daughter. As the story progresses, it is slowly revealed that he is a former virtuoso violinist, and that he had a wife named Louisa. Life is good, until Louisa disappears, never to be seen again.

So who is the culprit? Well, it is not explicitly said, but it is implied that it is the work of an Orwellian government, intent on monitoring every step its citizens take. Thus, the citizens have devised ingenious ways of staying in touch with everyone, without arousing suspicion. People have set speeds of walking, people have set codes, people have set routes to go home.

In the midst of this, an underground movement is underway, a movement that is designed to topple the Orwellian government. The details aren't revealed in the book, but it is hinted that the movement succeeds, as people have said that when the government finds out, then it is already set into motion.

This is the general scene that the book presents to the reader. It is a very complex plot, but at the same time, the book is quite terse and minimalist. In only 194 pages, the author was able to paint a very dystopian view of society. I give Jesse Ball credit for this. I have read one of his previous novels, entitled The Way Through Doors, and I was also impressed with the experimental nature of that work. This current book is similar, less experimental, yet avant-garde nonetheless. He uses various different font sizes to differentiate the different nuances of every scene. I also enjoyed the meta-fiction aspect to things. In the third part of the book, Molly writes a play, which mirrors the life of her and her father, in the past, present, and future. It is then implied to the reader that the events in the play actually presented the events that happened to William in real-time.

I should say this is a tragic book. After all, books about Orwellian societies usually are tragic, with the end simply a picture of the devastating demise of an idealist hero. In George Orwell's 1984, Winston Smith dies hopeless in the end. Without revealing further details, William's future is bleak as well, I should say. However - and this is what I think differentiates this book from the rest - there is hope. The underground resistance movement has started, and the reader is made to infer that change will arrive soon, for the better.

Yes, that is the aspect of this novel that I like the most. For such a terse and concise novel, this packs a big punch. The story continues on, even after the final page. And I have to say, there's light at the end of the tunnel. 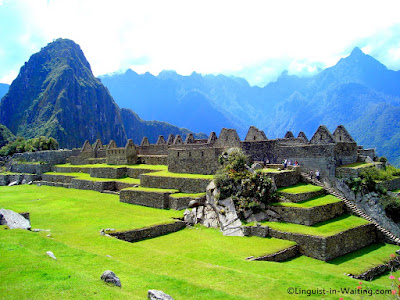 (Terraces and Huayna Picchu, from my Machu Picchu Series)