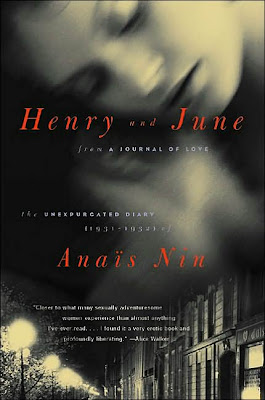 An edited version of this article was first published as Book Review: Henry and June by Anaïs Nin on Blogcritics.org.

Is it possible to love mutliple people at once? Can one really devote oneself to several people all at the same time? Polyamory, in its various different forms, is just one of themes that run through this exquisitely written diary of Anaïs Nin.

In order to do this review proper justice, I should begin by stating where I am coming from. I am a fan of Henry Miller, and I have read both Tropic of Cancer and Tropic of Capricorn. Both books mesmerized me, with its unusual narrative, blending fact and fiction, narrating about the escapades of Henry Miller in Paris. And of course, through the course of reading those books, I encounter Anaïs Nin, one of Miller's companions. It made me think what would it be like to be a companion of Henry Miller, this author who seemed to be sexually charged like no other human I have encountered.

Thus, reading Henry and June felt like I was reading the other side of the story. Anaïs narrates her emotions, from the beginning to the end. First, she gives details of how she felt for Henry Miller, as well as his wife, June Miller. Early on, Anaïs portrays herself to be someone capable of loving multiple people, of both sexes. It was quite interesting to read the deepest emotions that Anaïs had with respect to lesbianism. It also reflected the views on homosexuality back in the days. Anaïs Nin and Henry Miller lived a Bohemian life (read: not conservative), and yet Anaïs's attitudes towards lesbianism seemed rather conservative to me.

The most prominent part I take issue with is the fact that for Anaïs, it seemed that if one is female and loves another female, either of two things must happen. One either has to be masculine and take on male characteristics, or the other female should be the one to do so. I find it interesting that as much as she was bisexual, and open to the idea of lesbian relationships, the gender binary still exerts an influence on her views of same-sex relationships. Here I am, wondering, what is wrong with loving another woman, if one is also a woman, just because you find her attractive? In the way Anaïs describes June Miller, she attributes masculine characteristics to her. She dreams that June grew a penis, and that all along, she was male, and therefore was able to penetrate Anaïs. Anaïs also thinks that she is masculine and have male-type personalities, such that a feminine person like June would fancy her. These views are something that I personally disagree with. I do not mind same-sex relationships, but if one engages in one, I don't think there is the need to force one such relationship into the constraints of the traditional gender binary.

What I am amazed at with respect to Anaïs Nin's personality is her apparent ability to love multiple people at once. She has several uses for Hugo, Eduardo, Allendy, and Henry, which are the four men in her life. Personally, I think it is quite functional, and as long as the other people consent, I think it is not a problem. The problem though, is that in reality, not a lot of people would want to share an individual with someone else. I personally would not want someone else sleeping with my partner. In her credit, Anaïs Nin has managed quite well these multiple people, and to some degree, it worked.

The thing that I disliked about this book is that it is uni-directional. It simply talked about Anaïs Nin's relationship with Henry Miller from the beginning to the end. I do understand that this is actually a collection of exerpts from her diary: she published her diary in several volumes, but those were expurgated. Those volumes deleted all references to her love affairs. This book is actually a collection of those deleted passages, that should one read both versions side by side, it would be amazing as it seems that the two diaries have a different feel to them.

Anyway, it is said to be the case that these passages were deleted because Anaïs Nin felt like she couldn't publish them without hurting her husband, Hugo. If that was the case, I wished she would have just divorced him, instead of still being married to him, while carrying an elaborate affair with Henry under Hugo's nose. There's too much emotion, too much drama, too much oxytocin in this diary, that for a rational being like me, I find it hard to comprehend why for the longest time, she couldn't make up her mind as to whether she loves Hugo or Henry. But I guess for her, it was fine to love both, and therefore, she didn't choose one over the other.

Some people tell me that Anaïs Nin was a great character, having influenced the feminist movement and such. But I tend to disagree. She could have been a great character if she owned her actions, if she published these writings while she was still alive, if she went ahead and shoved her ideas down other people's throats, without worrying of offending them. Instead, she deleted her diaries because she didn't want other people to be hurt. Everyone can write a diary, and everyone can write an erotic diary. But that is not a sign of greatness. On the other hand, Henry Miller was never ashamed that he had a sex life, he was never ashamed to write about it and publish it. He was never ashamed to take the manuscript to a publishing house, and in fact, by doing so, laws regarding obscenity and literature were revised. Now that is great.

Thus, after reading this diary, I feel like Anaïs Nin was not a great character in history, but instead, just a companion of a great character in history. Although I should say that I am grateful for the fact that her unexpurgated diary was published, even though it was after her death, as this allows most of us out here to see that it is normal to have these feelings, that it is okay to love men and women regardless of what one's gender is, that it is okay to feel that way towards another human. Few people get the courage to write about it, let alone let the rest of the world read it. 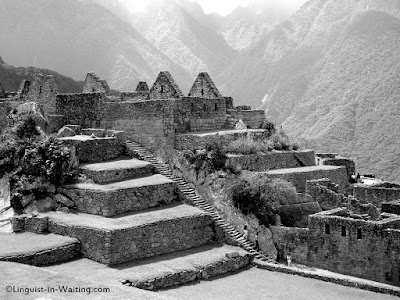 (The Ruins, from my Machu Picchu Series)