Last month, during the last week of classes, I decided to attend several concerts from the Music Department. One of the concerts I attended was the Chamber Music Recital. Overall, I think I actually liked it.

First, Mozart's Sonata for Two Pianos was played, by Joseph Shin and Allicia See. Somehow, I had the impression that they were the best fit for this piece. As much as I wanted to not be stereotypical, somehow, it was quite fitting that they were Asian, and that their performance was very perfect and crisp, very appropriate for a Mozart piece. I have to say, though, that I am not a big fan of Mozart.

The second piece was Chopin's Nocturne in C Minor, performed by Ana Vafai. Now this is one spectacular performance. I always am surprised when I see tiny petite performers who can deliver. Her small body doesn't suggest at all that she can be quite powerful at the keyboard, and yet she is. I loved every moment of her performance.

Mo Su is the third soloist in the program. I actually heard her play before, when she gave a piano recital last semester. At that time, I didn't like her performance; I wasn't impressed with the apparent lack of coordination with the other players. I am not sure whether that is still the case right now, as the piece she performed was for solo piano. However, I should say that I was impressed at her rendition of the Chopin.

Finally, I should say something about the trio of performers that performed that night. Chris Culp on clarinet, Jacqueline Potts on cello, and Antonella Di Giulio on piano: these three people were great as a team. It was impressive how they knew how to read each other's cues, and performed as a whole, as a single unit. I do not know much about clarinet-cello-piano trio literature, but the pieces they performed that night were quite impressive. 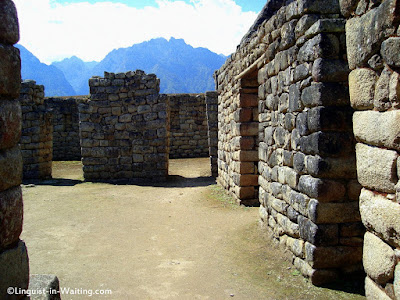 (Room, from my Machu Picchu Series)