One day, I was listening to my metal station in Pandora, when a song was played, and it caught my attention. It turned out that it was called Start Again, by the band "Red". I liked the music overall, that I have decided to check out the album as well.

Later on, I realized, as I was listening to the music over and over again, that it might be Christian rock, and sure enough, it was. However, instead of aborting and not listening to it anymore, I decided to actually investigate, and see. So, as an exercise, I am putting the lyrics of this piece here.

And I remember everything,
Everything I loved,
I gave it away like it wasn't enough
All the words I said and all you forgive
How could I hurt you again?

Emptiness inside me, wonder if you see
It's my mistake and it's hurting me
I known where we've been
How did we get so far?
What if, what if we start again?

The piece begins with 4 measures of synthesized music, followed by 4 measures of a piano motif. This is succeeded by 16 measures of guitars and orchestra, then the first verse appears. Musically, it is very catchy.

There are two ways one can interpret this piece. The first, and more obvious one, is that of a broken relationship between two romantic partners. The singer wants to start the relationship once again, after admitting his mistakes. Thus, the song is one of asking forgiveness from the other party, hoping that a reconciliation would take place. That is fine, but wait until you see the second interpretation.

The second interpretation is more of a religious one. Ever heard of the story about the prodigal son? This is basically the prodigal son singing. The prodigal son finally realizes the hurt he has caused his father, and is pleading if it is okay to start again. If one is familiar with the religious themes, then the parallelism becomes obvious.

The thing is, I do not understand why it is always a self-pessimistic view that religion is promoting. It is always the case that one is mistaken, the one is defective, that one is frail and needs saving. But then it makes sense, because if this is not the mindset that is promoted, then why does one need religion in the first place?

Anyway, the good thing is that I can tune out the lyrics. So yes, I still enjoy the music. I just don't pay attention to the lyrics. 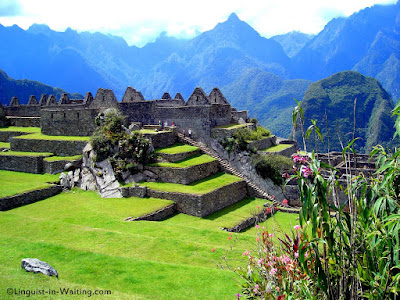 (The Long-Awaited View, from my Machu Picchu Series)