A few weeks ago, I attended a concert by the UB Percussion Ensemble. I've always made it a point to attend the concerts of this group, as I happen to be a fan of Tom Kolor (the director), and somehow, I like modern and avant-garde music. It is fortunate that this university houses a stellar cast of performers that have the talent and ability to handle music that is rather difficult to execute.

The program began by the piece North South East West, by Caroline Mallonee. It was quite an interesting piece, where four players are set up in such a way that they are positioned in the four corners of the auditorium. I loved the way space was utilized as a musical parameter, as the rhythms and the sounds travel across the hall. I was very much impressed.

The next piece was Six, by John Cage. They actually performed this piece twice, as Cage doesn't really tell the players what instruments to play, he just tells them when to play. The two performances of the piece were quite different from each other, and I liked the effect of constrasting them side by side.

Finally, after the intermission, was the grand tour de force piece of the night. They performed Persephassa, by Iannis Xenakis. Somehow, he's turning into my favorite composer. Again, the performers were positioned all throughout the auditorium, creating this amazing surround as the piece progressed to the climax. I loved every moment of it.

I attended this concert during the last week of classes this past Fall semester. It turned out to be a very awesome way to end the semester, with a bang! 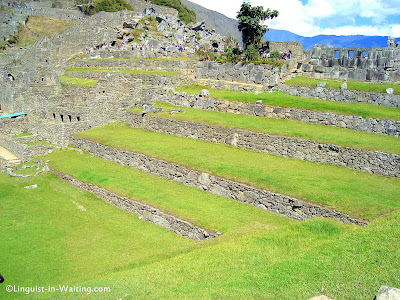 (Terraces, from my Machu Picchu Series)