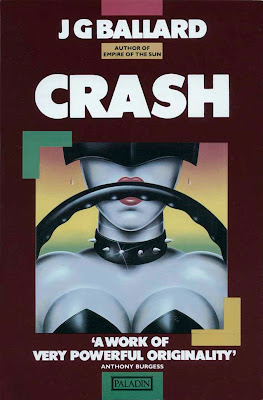 An edited version of this article was first published as Book Review: Crash by J. G. Ballard on Blogcritics.org.

Sometimes, humans can be sick. Very sick. Sick enough to make me puke sometimes. Which makes me think that sometimes, one would hope that the scenes that were described in this book remains fictional. That being said, humans can come in all shapes and sizes, including their fantasies and imaginations. This book presents one slice of the spectrum.

Crash is a novel by J. G. Ballard, published first in 1973. It can be categorized as transgressive fiction: shock value plays a big role here. In one phrase, the content can be summarized as sex and car crashes. So if you decide to read this, fasten your seat belts and be prepared for a nasty ride.

James Ballard is the protagonist and narrator, and one day, he is involved in a car accident, where he unintentionally kills a man. In that accident, he meets the now-widowed wife, Dr. Helen Remington. They bond together. As the story goes along, they meet a man named Vaughan, who has a sexual fetish for car crashes. They then form a little clique where they follow car crashes around the city of London, and then have sex in cars. All of their sexual adventures escalate, with Vaughan having the ultimate goal of being involved in a car crash that will result in the death of the actress Elizabeth Taylor.

Overall, the narrative is not dynamic: it is rather flat, with just every chapter narrating yet another sexual encounter with the characters in the book. Plot development isn't the forte of this novel. Rather, this novel puts a huge importance on the fact that it is transgressive fiction: every chapter is painful to read, as the things that were described were just sick and different, very deviant, deviant enough to perhaps be categorized as an abnormality in the DSM-IV.

The narrative is not meant to arouse the reader either: throughout the book, there are numerous explicit accounts of sex of various combinations. There are plenty of sexual encounters between men and women, both heterosexual and homosexual. The descriptions were pretty graphic, and yet it didn't arouse me the way an erotic novel can. That was the author's intent perhaps, to provide a different perspective on things. The author intended the book to be an exercise on the concept of how humans can be so dependent on technology, in this case, automobiles. Humans depend on automobiles for much of their waking life, and this novel takes it to the extreme. In the novel, the characters fail to be sexually aroused unless the sexual act takes place in or around car crashes. It almost feels like a thematic reductio ad absurdum.

Finally, if that is what the author intended this novel to be, then that is the only saving grace of this novel, at least in my book. I do agree that humans can be so dependent on technology. Take the iPod for example. Everywhere people go, people seem to be plugged in with their headphones, closeting themselves in aural seclusion in what used to be public places. Perhaps Ballard was a visionary and saw this technological dependence to be malefactive even back in 1973, when this book was written. It just resulted in a book that is so shocking, that even readers who have liberal tastes have a hard time digesting it. 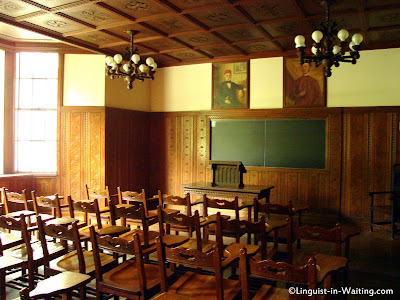 (Yugoslav Room, from my Cathedral of Learning Series)