Book Review: The Gospel According to Jesus Christ by José Saramago 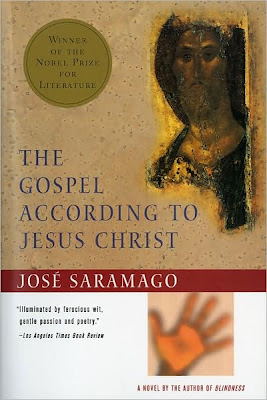 An edited version of this article was first published as Book Review: The Gospel According to Jesus Christ by José Saramago on Blogcritics.org.

Jesus: a household name for most of the Western World. We know who he is, what he stands for, and we think we know his origins. But do we really know it? Or is our knowledge more a product of myth and legend? This novel provides an alternate history, a history that may be said to be more realistic, from the point of view of a skeptic.

This novel tells the tale of Jesus, son of Joseph, from the time of his birth, up to his death. It follows most of what the Bible says Jesus' life was: with a few major changes. I'll assume that readers of this review are familiar with the Biblical account of the life of Jesus, so I'll just point out the changes that are crucial to this alternate account.

First of all, this book fills in the "missing" years of Jesus' life. In the Bible, there is an account of the life of Jesus from his birth up to when he was 12 years old. Then nothing else is reported until when he is 30 and is baptized by John at the Jordan River. In this novel, this is not the case. There are plenty of accounts of Jesus' life in between. His father Joseph dies when he is 13, and he leaves his house to fend for himself for several years, spending time as a shepherd with a character named Pastor, who is later revealed to be the Devil. Saramago rearranges several Biblical episodes in this book. For example, the Bible states that Jesus spent a considerable period of time alone after being baptized, and the Devil proceeds to tempt him. In the novel, the temptation occurs while Jesus is a shepherd with the Pastor. The Bible also states that Jesus spent 40 days with God, learning of his purpose here on Earth. In the novel, this happened as an episode on the Sea of Galilee, when a mist envelops the boat that Jesus was occupying, and God and Jesus, together with the Devil, had a conversation.

Perhaps the most controversial aspect of this novel is the fact that Jesus is portrayed to have carried a relationship with Mary Magdalene. Yes, folks, Jesus is not a virgin in this novel. He has a partner. And given what I know about religion and its supporters, I don't think that sits well with the conservative folk.

But seriously, is the Biblical narrative realistic? Reading this book has made me reflect on my own religious upbringing, and it has lent support on my current beliefs, which is one of irreligion. Is it really realistic for a regular human being to be free of natural human desires, including sex and alcohol? I find this book a more realistic account of a man who happened to have big dreams for himself who existed 2000 years before.

Another aspect this book raised is that of faith. Religion teaches us that God is Almighty, and that it is a virtue for one to give one's life to God, whether by being a martyr or by devoting one's time and effort for the works of God. However, has it ever occured to anyone of us that God is perhaps the most selfish being that humans have ever conceived of? God is restless, God is never pleased, God needs sacrifices, God needs lambs that are not injured or diseased. God needs martyrs, God needs people who will be decapitated, beheaded, burnt alive, tarred and feathered, and so on. There is an episode in the novel where Jesus asks God about the future, and God responds that there will be wars (pertaining to the Crusades), in which there would be plenty of people who will die just so that God can be appeased. From a skeptic's point of view, that is a very selfish supernatural being, requiring the deaths of plenty of individuals just for his own self-satisfaction.

Reading this book might sound like it is preaching to the choir: after all, I already identify as an atheist. But I challenge all the believers out there to pick this book up and see an alternative account. My experience with religion in the past was such that believers were discouraged to read material that might compromise one's faith. But in my point of view, unless one challenges one's faith, then one doesn't know whether one's faith is strong or weak. Read this book and see if you still believe in the mythological account of the Bible. The way I see it, there's more points in which one needs to suspend one's disbelief in the Biblical account than in Saramago's.

Needless to say, I loved this book. I am giving this book 5 out of 5 stars. 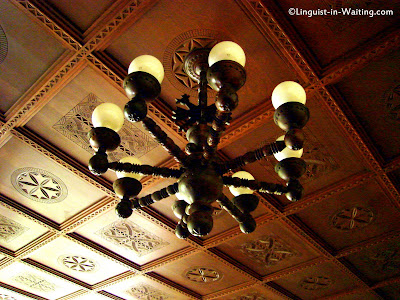 (Chandelier, from my Cathedral of Learning Series)