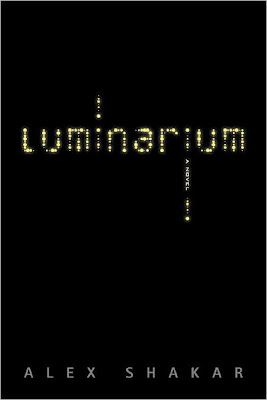 An edited version of this article was first published as Book Review: Luminarium by Alex Shakar on Blogcritics.org.

Your twin brother is in a coma, your family is dysfunctional, the company you have founded is being taken away from you, your girlfriend abandons you, and you're dead-broke: what would you do if every person in the world is dead-set against you? This is essentially the premise of Alex Shakar's novel entitled Luminarium, where the topic of human despair interfaces with modern technology.

The narrative centers around Fred Brounian, the protagonist, who, together with his twin brother George, and their younger brother Sam, founded a software company that deals with computer programs pertaining to virtual realities. So far, it's been a hit: the novel is set in 2006, and with the Iraq and Afghanistan Wars going on 5 years after 9/11, it is said that the war industry has taken interest in their virtual reality software in order to train soldiers in simulated combat.

However, what happens if you have three brothers who are brilliant with programming, and yet have no business degree? Well, through some legal tricks, the company is in essence stolen from them by the big boys. That's one unlucky strike against Fred.

The second unlucky strike? George gets cancer, and is thrown into a coma. Being his twin, Fred wants to keep him alive as much as he can, draining his savings, his income, up to the point that he becomes broke. But, George doesn't wake up.

In short, there are just so many bad things that happened to Fred, that one would think that Mr. Murphy was having a field trip.

So that's just the best scene to enter the bizarre: Fred signs up for a brain experiment, suggesting that it is a study where one simulates emotions and feelings usually experienced by getting religion, without actually attending church. From the looks of it, it's basically a study on the neurophysiology of religious belief. And why would Fred not sign up for it? After all, he earns 50 USD every session, and he needs some hope, given his scenario.

That triggers the weird episodes. He experiences out-of-body episodes, he "merges" with objects and other humans, and the greatest of them all, he gets a series of emails from his comatose brother. I won't reveal what this is about in this review, but this is basically what kept me going.

So, did I like the novel? Hmm, I would be lying if I say yes. And here's why.

First, how pathetic can the main character be? In my opinion, I think he is the most hopeless character I have encountered in the longest time. Whatever happened to reason? He continues on sticking up for George even though George is already halfway out the door, he continues on bugging the folks that stole his company from him, asking for his job back when it is really clear that they wouldn't give it back to him. He is just dumb, and unwilling to move on. If there is something great about this aspect of the novel, then I think I would consider this as an etude in pathos. Because in my opinion, the main character is the most pathetic character out there.

Second, I have this feeling that all characters in this book are not "normal" in a sense. Everyone has a flaw, which is somewhat reflective of reality, I admit, but in the context of reading, it makes it hard for a reader to identify with any one of them. When reading fiction, one usually "roots for" one person. However, given that Fred Brounian is very hard to identify with, one tries to find others. And yet one fails. Fred's dad Vartan is a has-been actor turned struggling magician. Fred's mom is this crazy reiki practitioner. Fred's younger brother Sam is a highly introverted dysfunctional computer programmer who always wears the same black outfit to work. Given thiss novel, I wonder what happened to the author to write a version of New York City this bleak and dark.

In short, this was a messed-up novel. After 430-something pages, I was just glad that it was over, and that I can move on to a new book. Irritation is not something I expected to experience reading a book. On the other hand, if this book was written in such a way that that was the goal, then I say the author did a great job at it. 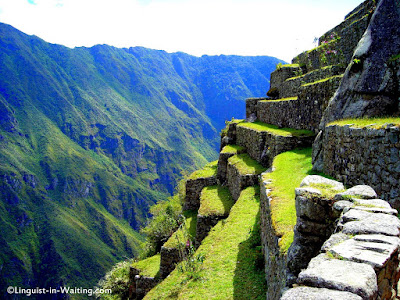 (The Steep Views, from my Machu Picchu Series)