Eating Portland in a Food Cart

I recently spent 4 days in Portland, Oregon. It was a city that I have visited before, back in 2009, when I spent a week in Seattle and Portland for vacation. I remember enjoying this hip and cool city, so I was looking forward to it this time around. And sure enough, it didn't disappoint. Especially with the food. Portland is known for its abundance of food carts. In fact, I later learned that food carts are really big in Portland, that there's even a place called Cartlandia! If ever I get to Portland again, I will definitely try to visit this place.

Okay, so my first lunch stop was Flogene's Home Cookin' which is a cart that serves Southern fried chicken. I was greeted with a heartfelt Oh HI! with that Southern drawl that makes you feel like those words were hugging you. I tried the fried chicken and a biscuit ($6). I was asked if I wanted sides, and when I couldn't make up my mind, I was offered to sample all three of them! Beans, spiced potatos, or pickled cucumbers. They were all good, but I guess I was a fan of the beans. And should I say something about the chicken? It's oh so good. It's that good that I know if my dad were eating it, he would eat even the bones by chewing it until it's all cracked up. If there weren't any other choices around, or if my stay in Portland is longer, then I would definitely head back here and try their other offerings.

The next day, for lunch, I went to the Dump Truck. Given the name of this establishment, I was sure this would be an interesting experience. I went for the sampler, so that I can get a taste of the various options they had. We got two dumplings each of Mr. Ma's, Down to Earth, Bacon Cheeseburger, and a fourth one whose name I couldn't remember. And for the price, I think it was very well worth it. Think of this as Asian fusion streetfood. Every piece was well done, just the correct texture, making one think that this was done in a market in Shanghai, but at the same time, the flavors are definitely fusion, something that one would imagine encountering in a glitzy restaurant. It was quite a treat! And the sauce? Oh, I am a fan. I almost hoarded them. We took containers of all four sauces, trying them all out. They were the best dumpling sauces I have had. I do have my favorites, though. And I think the tahini sauce is a little slow or tame. But the other sauces more than compensate for it. I should also say that they take care of their customers quite well. We unfortunately spilled one of our orders (a bottled water that was positioned wrongly rolled off the table and knocked off one of the plates). They gladly made another order for no charge. I was impressed. They deserved the tip.

For my third lunch, I tried Taqueria El Rodeo. I was looking for a new food cart to try, and since I saw that this place sells tacos by the piece, I decided to sample a few. I chose five different flavors, and sure enough, they were tasty. Just wait for 5-10 mins and they will be ready and hot for your enjoyment. Perhaps my overall impression with this place is that it is just okay. I wasn't too impressed enough to say I am a fan. But at the same time, it did not give me a revolting impression. The taco fillings were great and tasty, but the taco perhaps can improve. Why do I say this? Well, I do have experience eating in a real taqueria in Mexico City, where individual tacos cost less than a bottle of soda. The quality of the taco here in El Rodeo is a little coarse, and there's just something that I felt didn't work, but at this time, I couldn't put a finger to it. So will I go back here? Probably, if I have a taco craving. But I will still look for better places.

For lunch on my final day, I went to the Bangkok Duck and Chicken. As it was a Thai place, I tried the Duck Pad Thai. Together with a Thai Iced Tea, my lunch cost 8 USD. Now, was I satisfied? Well, yes and no. At 7 USD for a duck pad thai (duck costs 2 USD extra, so chicken pad thai is 5 USD), plus a thai iced tea for 1 USD, given the quantity, who could beat that? However, I don't know. I didn't like the quality of the noodles too much. I think they stuck to each other too much, which I didn't expect. It was also more spicy than peanut-y. I was surprised that there was a spice level to pad thai: all of my previous pad thai experiences didn't have that choice. I somehow automatically said "spicy" which meant that it had plenty of crushed red pepper. That was fine. I can eat spicy food. But given the quantity, I was alternating between the pad thai, the thai iced tea, and a piece of voodoo doughnut. So I don't know. I liked my lunch, but it was just okay. For the price I paid, I can't complain, but this isn't the best pad thai I have had.

Finally, there was one time in which I actually hit the food carts not for lunch, but for breakfast. I went to pay a visit to the Gaufre Gourmet, who sells Liège-style waffles. So I figured that would be a great way to try it out, as breakfast. I found it to be just the right consistency, very fluffy and light, as well as with just the right amount of sweetness. Together with a latte, it was the perfect breakfast for that day.

So yes, if ever you find yourself in Portland, make sure to check out the numerous food carts that this amazing city has to offer. There's plenty of places to eat, but these cheap places on the side of the street will surprise you. 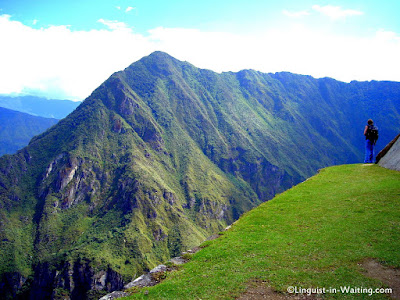 (Human Admiring the View, from my Machu Picchu Series)