Gallivanting in Guatemala (and Honduras)

So my trip to Guatemala and Honduras has finally come to a close. It has been a fun trip, I have learned a lot, and I can't wait to go back. If someone would ask me whether I would do a trip that long again, I would definitely say yes.

So what is the purpose of this post? This is my summary post, giving details of the overview of the trip. After this post, I will be slowly posting the things I have seen, complete with pictures.

But first, let me tell you about my itinerary.

Well, what itinerary? Actually, this was the first trip in which I didn't have any concrete itinerary. Previously, I would plan every stage of my trip, like where to sleep, where to eat, what to see, and so on. This time, with the exception of one hotel reservation, I had no plans whatsoever. I went where the wind took me. I only made a reservation for one night when I arrived late at night in Guatemala City on the night of January 11, but aside from that, everything was fluid. This was how it all fell into place.

January 11: I flew from Buffalo to Chicago to Houston to Guatemala City. I arrived late at night, and my hotel picked me up from the airport. I just slept it away.

January 12: I took a bus to Copán, Honduras. This trip took 5 hours. The bus left at 9 AM, and I was across the border and into Honduras by mid-afternoon. I found a hostel where dorm beds were 6 USD a night. I then visited the Macaw Mountain Bird Park.

January 13: Still in Copán, I visited the Mayan Site of Copán. This was my first Mayan site, and I enjoyed myself. Afterwards, I just relaxed, read a book, and hung out with fellow travelers. The highlight of the night was when two Frenchmen, one Canadian girl, two Belgian girls, one German dude, one Italian dude, and one Filipino just gathered around a table and shared a bottle of rum, while chatting in Spanish.

January 14: I head out early and ride a microbus to the Guatemalan border. I cross back into Guatemala, and ride another microbus to Esquipulas. I witness briefly the celebrations for the Fiesta de Cristo Negro, while waiting for my bus to Flores, which departs at 1:30 PM. The supposedly 8-hour trip became 10 and a half hours. Sitting next to me was a Mayan woman breast-feeding her infant, while chattering away in Mayan in her mobile phone. During the trip, part of the roof gets blown away, and sure enough, the bus breaks down in the middle of the jungle late at night. After waiting in pure darkness for one and a half hours, we were transferred to another bus, and we reach Flores shortly after midnight. Good thing the hotel I went to had an available room, for 16 USD a night.

January 15: I buy a shuttle bus ticket to Tikal National Park, which is an hour away. I then spend most of the day in Tikal, feeling like Indiana Jones, discovering pyramids hidden in the middle of the jungle. And yes, the view from the top of Temple IV is just beyond words.

January 16: I am on the move again, this time, my destination is Cobán. The trip is 5 hours by bus, but somewhere near Sayaxche, the bus needs to board a rickety ferry to cross the Rio de la Pasion. Upon reaching Cobán, I find a hotel for 5 USD a night. Then I check out the town.

January 17: I join a group tour for Semuc Champey and Grutas de Lanquín. Semuc Champey is perhaps the most beautiful natural site in Guatemala, where I hiked, trekked, and swam in crystal-clear pools of water. Lanquín on the other hand was a cave system, where I became filthy with bat droppings, but the scenery inside was quite amazing. After the tour, my body was just so beaten up, that I decided to splurge a little bit and have a fancy dinner at the Casa D'Acuna.

January 18: I take the bus back to Guatemala City. I arrive in Guatemala City around 2 PM, then immediately I took the taxi to the airport, in order to catch the shuttles to Antigua. I reach Antigua around 5 PM, and found a hostel where dorm beds were 7 USD per night. I figured I would take it slow the next few days, as my body was quite beaten up after Semuc Champey and Lanquín. My camera took an excursion this time.

January 19: I stroll around Antigua, visiting several ruins of monasteries, convents, and churches. The camera gets a workout. I also do laundry, and overall, enjoy the cobblestoned atmosphere of the town.

January 20: There are so many things to see in Antigua, that for a second day, I just stroll around and sight-see. I also write my postcards to be sent to my loved ones in various places around the world.

January 22: Chichicastenango has a big market day, being a Sunday. The whole town becomes crowded, and people are buying and selling everywhere. The church is active too, with incense everywhere. After getting my market fix, I head out to El Quiche, in order to visit my third Mayan site, Q'umarkaj. After spending an hour, I head back to Chichicastenango.

January 23: I pack up my stuff, and head to Nebaj. In order to get there, I take a chicken bus to El Quiche, then transfer to a microbus to Nebaj. The mountainous highway required the microbus to dodge landslides and boulders fallen into the road. I reach Nebaj a little after lunch time, and for the first time, I feel like I am the only foreigner in town.

January 24: Together with a local guide, who speaks Ixil, I trek the Sierra de los Cuchumatanes. It is a beautiful scenery, with cows grazing the mountainside, as if I were in Switzerland. And indeed, the scenery is Alpine enough that two Italian immigrants in the 1920s decided to make a cheese factory there.

January 26: I take an early bus to Guatemala City. I arrive around lunchtime, and found a hotel for 25 USD per night. My most expensive hotel so far. Guatemala City is rugged and rough, but it had enough things for me to do. I checked out the cathedral, which was quite stately.

January 27: Still in Guatemala City, I further explore the museums and the palaces in the capital. I also paid a visit to the market, where I bought souvenirs.

January 28: I took a taxi to the airport, then I flew from Guatemala City to Dallas to New York City to Toronto. I spent the night in Toronto, and I took a bus to Buffalo the next day.

That was a summary of my latest trip. In the next few days, I will be posting details of each of the things I have seen, so stay tuned. This was definitely a great adventure, and I would totally do it again if I get the chance. 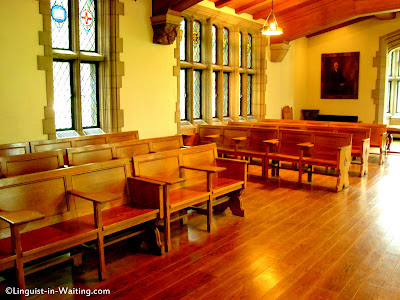 (Wide Chairs, from my Cathedral of Learning Series)