Perhaps it is a curse of mine that I have a very well-establishment biological clock. I usually get up at the same time every day. I am very much a morning person, and can get up say at 6 AM and that is not a problem. Most of the time, that is a blessing, but sometimes, that can be a curse.

Especially for example when one is traveling and there is a time zone change.

Like when I went to Portland, for example. I was flying from Buffalo, located in Eastern Standard Time, and Portland was in Pacific Standard Time. I then gained three hours going there. However, that meant that my body was waking me up at about 3 AM every day. In fact, during the four nights that I spent in Portland for the conference I was attending, only during the last day did I wake up at 5:33 AM. Finally, I sort of adjusted, only to screw up my biological time again since I was flying back to Buffalo that night. The previous nights, I have been waking up at 3:38 AM plus or minus. I would lie down hoping that I get some more sleep, but I didn’t. Still, the weird thing is that I am not tired during the night, I still go to bed on my regular bed time, which is between 10:00 PM and midnight. It is the waking time that sucks.

Oh well, I do not know what other people do to fix jet lag faster than how I fix it. That’s the only thing I do not like about traveling. As much as I like to go and see places both near and far, jet lag is just the only thing that I do not look forward to, and I just suck it up and expect that I will have a crappy sleep and some bouts of headaches during the first few days. 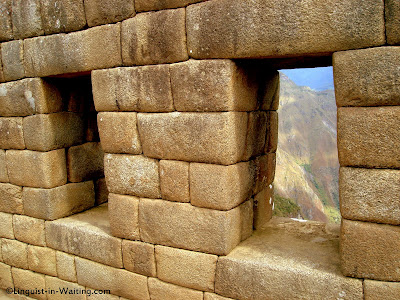 (Through Windows, from my Machu Picchu Series)