Flying definitely gives me the opportunity to see a slice of the population that I usually do not see often. After all, in my regular waking hours, I usually am only familiar with the university crowd, and that can be very different from the rest of the population.

First, there's always the business fliers. They feature expensive gadgets and they always get to board the plane before everyone else. That's because they sit at the front, as they pay more than the general public. They conduct phone meetings while in the terminal, and they even cannot let go of their phone and talk up to the last minute possible.

There's also the family going to Hawaii. They feature toddlers with bright shiny looking luggage, filled with coloring books, toys, and nowadays, DVD players and iPads. They also board the plane before everyone else, but after the business fliers.

Next, there's the interesting ones. During my flight from Buffalo to Newark on my way to Portland, I saw a lady who had the biggest breasts ever. It looked like she had two bowling balls underneath her sweater. And it didn't look like she made them big, instead, it looked like she had some sort of disease or something, because she doesn't look like the type that would want to have gigantic breast implants like that.

I understand that flying doesn't give me a correct sample of the population, because there is a slice of the population that don't even fly. But regardless, it is interesting to see the different kinds of people there are in airports. The other day, in Newark, there were two weird-looking European backpackers, wearing skin-tight jeans, and they had this weird pair of shoes, that looked like diving gear. It was quite bizarre.

Sometimes, I find myself at the airport, and I feel so detached from the rest of the population, it's funny. I have these episodes when I am waiting at the security checkpoint. A few years ago, we were heading to San Francisco, when the lady before us had a hard time at the security checkpoint. She was wearing so much jewelry that the machine would definitely detect. She had to take all of them off. And yesterday, there was a man who tried going through the security checkpoint with a boarding pass printed from home, but his printer was running low on ink! 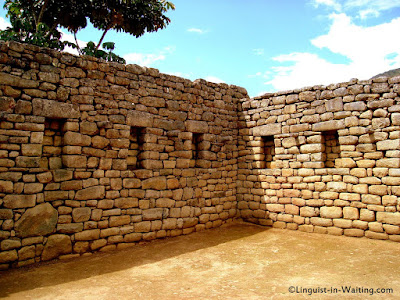 (Corners, from my Machu Picchu Series)