The other day, we were in the supermarket, and we passed by the recycling station. We saw a lady, who was dressed rather ladylike, tossing her beer bottles into the recycling station, in order to get 5 cents per bottle. I guess that isn't a problem, and it isn't, really, but when we saw the beer bottles, we had a little bit of cognitive dissonance.

The thing is, we saw her with several bags of empty bottles of Bud Light. Somehow, her dress and the image she is portraying didn't agree with the stereotype of a person drinking Bud Light. I actually expected her to be drinking something else, some beer that is more craft, high-end, or artisan. Not piss beer.

Fine, I admit, I have something against "light beer" or American macro-brewed pale lager. For me, it has no taste, it just tastes bitter, and nothing else. And given the image that that lady was trying to convey with her dress, it was quite contrastive with the image I had of someone who is fond of drinking piss beer, which is that of the guy with a beer belly, in front of the TV, watching sports, while drinking that beer with pizza and wings.

This reminds me of an occasion when my sister and I were somewhere in New York City, eating pizza in a Neapolitan pizzeria, and everything on the menu was Italian, including the beer. The table next to us had two ladies, and they wanted beer, and guess what they asked for, Bud Light! Why would you ask for Bud Light in a Neapolitan pizzeria? That is just something I couldn't comprehend.

Anyway, the other day, I bought a six-pack of Spaten Dunkel. Now that's definitely not piss beer. 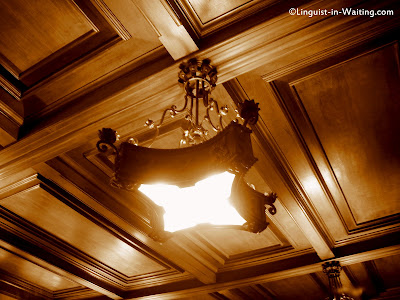 (Ceiling with Light Fixture, from my Cathedral of Learning Series)