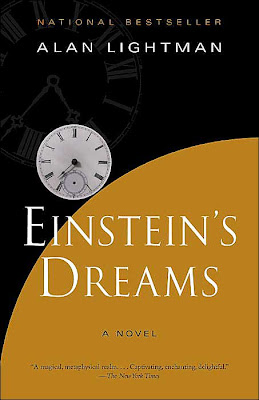 An edited version of this article was first published as Book Review: Einstein's Dreams by Alan Lightman on Blogcritics.org.

Time, as we know it, always moves forward, in a steady fashion. But what if there exist worlds in which time behaves differently? This is the main question that this novel tries to answer, using Albert Einstein and his dreams, as he works out his theory of time.

So how does this novel explore the notion of time? First, you take the real historical figure in the form of Albert Einstein. Common knowledge tells you that Einstein is known for his theory of relativity, among other things. But maybe you're wondering, how did Einstein come up with this theory, in the first place? This is where the novel steps into the picture.

Imagine Einstein and his friend, Michele Besso. Both of them are academics, but they also have their own personal lives. They have dinner together, they go fishing together, and given the genius that we know Einstein to be, sometimes, for a not-so-genius regular human being like Besso, Einstein can be weird. For example, Besso wonders how in the world Einstein manages his marriage, given his eccentricities? Why does Einstein keep on insisting to fish in this river, when he hasn't caught a single fish in the past? But then, Einstein is a genius, and these questions remain unanswered in Besso's head. This part of the narrative is tackled in the Introduction, the Interludes, and teh Epilogue.

What Besso doesn't know are the series of dreams that Einstein has been having, all about time. This take up the majority of the novel, and are written in the form of diary entries, all having dates. Thus, in a given date, Einstein dreamt one dream, with one particular peculiarity regarding time.

Yes, this is the interesting part. Every dream describes a world in which time does not behave as we know it. One dream was about a world in which everyone knew when the world was going to end. And given that premise, the diary entry described how people acted and went about their lives. In another dream, time moves backward, and effects appear before their causes. And in another dream, time moves at different speeds, depending on how close one is to the center of the earth. People who wanted to slow time therefore lived in places that are far removed from the ground, in buildings that are constructed in stilts, with the hope that they would age slower than people below them.

Structurally, this is one of the most peculiar novels I have come across. There isn't the default plot and development. In fact, there is no plot that binds the whole book, except for the fact that every chapter represents a dream that Einstein had. Implicitly, however, the novel can be seen as Einstein's personal etude as he was developing his theory of relativity. Whenever one has an idea that one is developing in one's head over a period of time, eventually, one lives and breathes the idea. I personally know this, being in a doctoral program myself. Developing that idea doesn't stop once one leaves the office. Instead, it continues, on the street, in the shower, even in one's dream. And this novel fictionalizes Einstein's mental journey as he develops his theory of relativity.

I personally loved this book. I think the premise was quite original, and it made a Gedanke experiment highly palatable, even for readers who may not care at all for Einstein's theory. After all, everyone of us have the notion of time. We may take it for granted, but this novel allows us to step back and ask, what if, what if time moved backward, what if time stood still, what if time was cyclical?

I recommend this book to everyone, regardless of how scientifically inclined one might be. It is a short book, but it packs a lot of mental content, that would leave one thinking and reminiscing about what-if scenarios even after reading the last chapter. 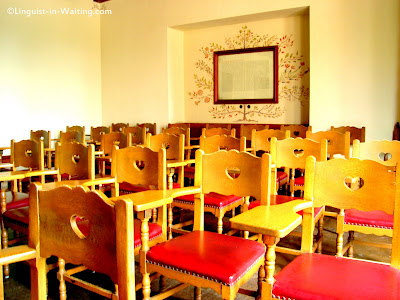 (Wood Meets Red, from my Cathedral of Learning Series)