While I was in Germany, I used the public transportation a lot. I used the train, I used the suburban railway, I used the light-rail transit, and sometimes I also used the bus. I loved the fact that the tickets for these modes of transport are unified, and that I can use all of them with just one ticket. However, there was one thing that was a little disturbing, and that was David Beckham's crotch.

See, everywhere I looked, I see David Beckham's crotch. I see it staring right back at me, in every station. Is it the case that Stuttgart sold its soul to David Beckham, so that his body is displayed in practically every billboard in the city? It is all because he released an underwear campaign, which is why all of its advertisements are now seen in practically every nook and cranny of the city.

Don't get me wrong, I don't mind seeing David Beckham's crotch, but it would be nice if there's a little variation. Like I told some of my friends, sea urchin sushi, no matter how delicious it might be, becomes something undesirable when taken in large amounts. 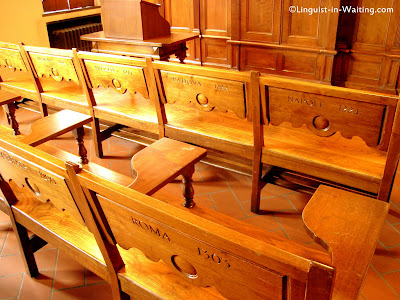 (Chairs with Names, from my Cathedral of Learning Series)