I always make it a point to attend the theatre productions by the Theatre and Dance Department of the university. I have had enough data points from the past that tell me that their plays and musicals are well-produced, and spectacular performances. Well, the mosts recent play they had produced, Fen by Caryl Churchill, is no exception.

Fen tells the story of a rural area in England, where there is a huge divide between the rich and the poor, the landowners and the servants. In between the hardship, the alcohol, and the pathos, is the love story between Frank and Val.

I will refrain from commenting on the plot here, because honestly, I still find my head reeling from the play, as it is rather difficult to understand. It is one of those things that one finds it hard to wrap one's head around. All I can say is that it is a tragic play, although there are plenty of comic devices that are set in place throughout the play.

Regarding the set-up, this is an intellectual play. Actors are required to play multiple characters, which adds to the complexity, from the audience's point of view. This thus requires very flexible actors, as they play children in one scene, and problematic adults the next. I also feel that the plot is hard to string together: the play is actually composed of several short vignettes featuring the various characters, and sometimes, it is hard to see what links each of them. That being said, one just has to think and relax one's head for a bit, and things will start making sense.

Regarding the performance, as usual, I am impressed. The student actors all were very professional, and I cannot say anything negative about the whole performance. The play might be hard to understand, but the performers knew it like the back of their hand.

Overall, I had fun. It was a thinking man's play, which makes it slightly unaccessible, but overall, I think I still like it. 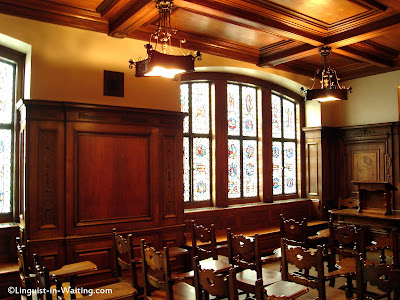 (Stained Glass and Antique Lights, from my Cathedral of Learning Series)