So I just finished a ten-day trip to Germany. After that, I can say that I was impressed, and yes, those stereotypes about German efficiency are all true.

And while we're on the topic of trains, I like the fact that all the transportation systems talk to each other. There is the suburban trains (the S-Bahn), the light rail system (the U-Bahn), and the buses. With one ticket, you can use all three. And yes, they're all on time.

And that's not all. Even the airlines and the trains talk to each other. One leg of my return flight was canceled, which was the first one, from Stuttgart to Frankfurt. So what Lufthansa did was give me a voucher, that was valid for several possible alternative means of transportation. I could take the train to Frankfurt Airport, or I could have used that voucher to rent a car and drive myself, if I wanted to. I opted for the train, and one hour later, I was in Frankfurt Airport, and caught my connecting flight. When I was in the train, they had a list of passengers with my situation, which meant that Lufthansa already communicated with Deutsche Bahn that there would be passengers holding a voucher.

Anyway, after visiting Germany, I felt that they have an awesome transportation system. Deutsche Bahn puts Amtrak to shame so easily. The last time I have had efficient transportation options was when I was living in Japan. It was quite nice to experience it again, albeit only for a short time.

I guess if I were to change something, then I'd just lessen the appearances of David Beckham's crotch in the train stations, because honestly, I see it in every station! 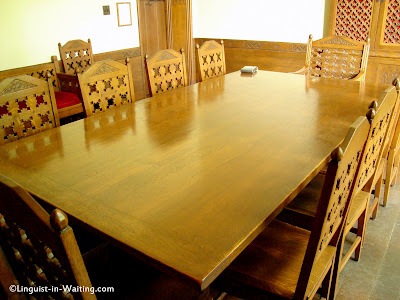 (Another Angle, from my Cathedral of Learning Series)